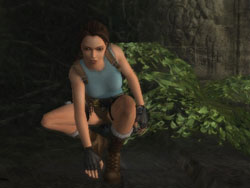 For a brief moment, I was back in 1996, and it was good. For those of you who don’t remember, that is when the original Tomb Raider came out, introducing the world to perennial video game hero Lara Croft.

At the time, the game was revolutionary and I along with nearly everyone else who played games back then, spent countless hours jumping around in old tombs, helping Lara find her way to mysterious artifacts through an army of wolves, bats and even dinosaurs. Lara was really something else. Besides being beautiful and the first real female video game star, the game was easy to control and had a perfect mix of action and puzzle sequences.

Needless to say, Lara and Tomb Raider became a real staple in the industry. Everyone was enamored by Lara to the point that at E3 one year an appearance by an actress portraying the video game vixen almost erupted in a riot. I was there, acting silly and chanting "Lara! Lara!" along with everyone else, caught up in the moment of seeing our hero in person, and forgetting, if just for a second, that she was just a made up character. Several games and a feature film starring Angelina Jolie really solidified her hold on the hearts of game players.

However, like all good things, it seemed recently like Lara was coming to an end. The last couple Tomb Raider games were mostly lackluster, and brought nothing new to the table that we had not seen in hundreds of other titles. In a few instances, like Angel of Darkness, the gameplay was not very good, and it was like they were trying to turn Lara into a new James Bond or something.

Eidos, sensing that they were losing control of their franchise, and probably seeing declining sales for their games, thought that something needed to be done. Bringing in developers Crystal Dynamics and Buzz Monkey Software and telling them to save the sagging series was no small order, but what they did was pure genius.

Originally called Tomb Raider 10th Anniversary Edition, they came up with the idea to re-make the original game, but with all the graphics and processing power that modern console systems could offer. The result is Tomb Raider Anniversary, and the result is impressive.

Anniversary does not exactly follow the original in terms of level design, though much of the flavor (and thus what everyone liked about the game) is there. It’s Lara in tombs fighting wolves and bears and yes, even a T-Rex at one point while also figuring out ancient puzzles that seem to have been built using technology well advanced from what ancient people’s were supposed to have.

Graphically, the game is quite stunning, with beautiful waterfalls and cool lichen-encrusted caves to explore. The wolves and other adversaries look real, and quite scary up close. Lara herself has gone under a bit of a makeover, softening her features a bit from the hard lines of Angel. She looks realistic, very fit and believable in her role as the consummate explorer. More than that, she looks real when leaping or flipping around, like a gymnast. I am not sure if motion capture was used to simulate realistic athletic movement, but if it wasn’t, then somehow the programmers nailed it anyway. You will really believe Lara is stretching out and catching that ledge.

The audio is also quite good, particularly the voice acting. The voice of Lara is voiced perfectly by Keeley Hawes. Her inflections are just right whether she is musing that something is not quite right, or simply saying "no" when you try to use an object at the wrong time. I hope to hear more of her in future games. Another good performance is put in by Grey DeLisle as the mysterious Jacqueline Natla. DeLisle has been doing voice acting in games for years and her professionalism shines through here. This is the first game in a long time where none of the voice actors put in a bad performance.

Although the levels share the same names as those in the original game, they are much bigger here, with more places to explore. There are quite a few secret type areas to find if you are diligent enough, which in addition to finding items like an extra med pack, also trigger the old (and sorely missed) secret tone from the original game. It’s nice to hear that little fanfare and know that you found a secret area.

The controls are a little difficult at first, though they will become second nature. Croft manor is a level that will help you master all of Lara’s moves, and although it is quite different from the original one, does offer plenty of jumping around and puzzle solving which you will need to master later on. I think that Croft manor was actually one of the more fun levels of the game actually, and that might be the first time I’ve said that about a tutorial.

Tomb Raider Anniversary is a real treat for gamers who want to re-live a classic. And if you missed the Lara Croft craze originally, then this is your chance to jump in. Long term, this may be exactly the series needed. Let’s hope future games keep true to the themes of the past. Tomb Raider Anniversary earns 4 1/2 GiN Gems, and is a must-have title for 2007, a full ten years after the original.