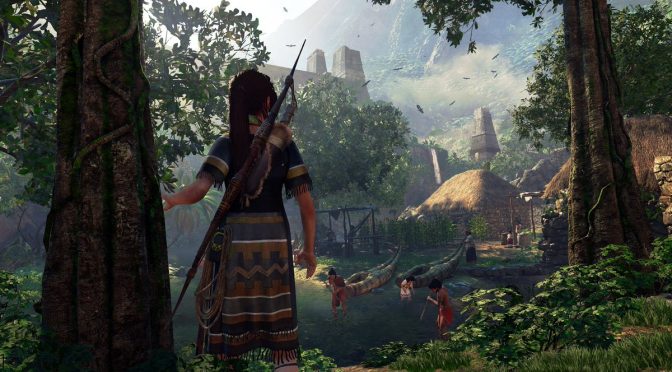 Lara Croft has always had a bit of a colonialism problem, as do all of our favourite treasure hunters; Indiana Jones and Nathan Drake. They are all white folks traipsing around the world, stealing treasures from other cultures. Even if they are saving the world, the level of artefact ‘borrowing’ without even consulting local archaeologists is getting beyond the pale.

Editor’s Note: Check out our full review of Shadow of the Tomb Raider.

With this in mind, I recently suggested an alternative to Tomb Raider, comprised of indigenous people performing museum heists to reclaim their cultures’ treasures.

I was just last night positing a game that flips Lara Croft's compulsive theft of cultural artefacts. How about a game featuring a team of indigenous people who crash museums to return artefacts stolen during colonisation.
We're not waiting for a loaning, we're taking it back. https://t.co/TDNbvSp512

Shadow of the Tomb Raider is the next in Lara Croft’s adventures and it seems that Crystal Dynamics is aware of the white saviour issue. Rather than simply romping across the world without so much as a hello to local people, Shadow sees Lara spend time with indigenous people.

The setting for Shadow of the Tomb Raider is South America, using the legendary Inca city of Paititi as the central hub for the game. New gameplay videos show a thriving city. Apparently, this is a civilisation ‘untouched by modern culture’ the voice over tells me. The NPCs speak in their own language, but you can choose to give them English voices.

The bustling city scenes are reminiscent of Assassin’s Creed: Origins, really bringing a society to life. And now Lara can trade with locals and do missions for them, but this is where it gets a bit sticky.  For one, we know trading between colonialists and the colonised never ended well. And two, the missions can’t help making Lara seem like the most adept person in the Peruvian jungle.

In one scene, what looks like a Paititi leader asks Lara to go and get ‘the champion’s bow’ from a tomb. Sounds like a standard quest, right. Except, we’re trying to avoid the white saviour syndrome, remember. In this scenario, random white woman stumbles across hidden Inca community, in the middle of the rain forest and seems to be the only one capable of getting their champion’s bow. Whatever would they have done before Lara?

This mission could have worked with just a little tweak on the dialogue. Instead of saying “I hate to ask you, but…” the NPC could have said something like, “We’ve decided to give you the honour of retrieving the champion’s bow.” This removes the implication that they couldn’t do it without Lara. It’s not perfect because it still implies that this white woman is worthy of honouring, when she probably hasn’t done much other than murder a few mercs and trundle through their temples.

In another scene, Lara tells an NPC that she’s found the herbs that his wife needs. Um, so, indigenous people who’ve lived in the jungle for over 1,000 years can’t find their own herbs? I wonder if there are any scenes of locals showing Lara things she doesn’t know, because she clearly wouldn’t have the knowledge they do.

That said, Shadow of the Tomb Raider looks absolutely gorgeous. It’s definitely going all out on the Uncharted style town scenes and chit-chat over radio. Also, the tombs look bigger and more interesting, taking us back to some old style game play, perhaps. In addition, there are lots of nice touches, like button hints coming up in mid-air and being able to toggle climbing highlights on and off, to make the environment more of a puzzle. So, there’s lots I’m looking forward to in this outing.

However, having watched some of the gameplay, I am worried that Lara Croft will still come across as the colonial interloper, who indigenous NPCs are largely fine with walking through their village, even though she’s armed to the teeth.  And are they going to tackle the  destruction of the rain forest or does that go without mention?

It’s hard to take Lara away from her colonial routes, but at least Crystal Dynamics are trying. Apparently, Lara does reach a point where she reflects on her actions, but as this is part of the origin story, this is the game where she becomes the ‘tomb raider’, we know from earlier games, meaning she can’t do that much reflecting. I’m just not convinced that Shadow of the Tomb Raider is going to be entirely successful in shedding the white saviour issues. At the end of the day, this series still relies on placing a highly competent, entitled white woman in an ‘exotic setting’ at the heart of its games. But then, that’s Tomb Raider.