In 2018, Microsoft launched its adaptive controller for Xbox One.  This was a leap forward for gamers with disabilities, who had largely been ignored up until then. The controller can be adapted for use in a variety of ways, making gaming accessible for people with a range of disabilities. However, blind gamers make up a significant proportion of the people who spend money on games, but remain excluded from the mainstream (sighted) gaming world. Bridging the gap, Ebon Sky Studios is developing software to allow blind gamers to create their own games.

Ebon Sky Studios is a blind development team based in the UK, Canada and Australia. This week I saw a Twitter shout out to help support the team’s application for the Holman Prize. The prize  awards financial backing to blind people who are pushing the perceived limits of vision-impaired people. Just by clicking on that Tweet I discovered the blind gaming community and a world of Audio Games, which I hadn’t really considered before.

Prior to this, I thought of accessibility as making mainstream games accessible to blind gamers. Now I’m aware of a whole new way of making and thinking about gaming experiences, which doesn’t necessarily involve any visual element at all. And there’s a sizeable audience for these Audio Games. 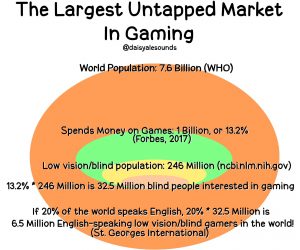 According to the latest figures, 13.2% of the world’s population spends money on gaming. The blind population sits at around 246 million, and assuming that blind people are just as likely to be interested in games as sighted people, we can assume that 13.2% of them spend money on games. This equates to 32.5 million blind gamers who are currently ignored by  the mainstream market.

Sable, from Ebon Sky Studios aims to fix that by giving blind gamers their own tool to make their own games, making it the first of its kind. Sable is code-free and scripting-free and uses menu based navigation with audio feedback. For instance, game developers can select a building type and then choose materials, such as stone or wood, which changes the audio for those in-game objects. These are simple fixes to what seem like major challenges, at first glance.

Pokemon Crystal, is known as one of the best mainstream games, when it comes to vision accessibility. Unintentionally, Pokemon hit on the importance of audio for blind players. Not only does it use turn-based combat,  but there are different collision sounds for everything, as well as different monster sounds, making it easier to identify things within the world without visual cues. But, as I said, these wins were unintentional and mainstream games don’t put the work in to consider the blind gaming community.

Instead, blind gamers have had to craft their own experiences in the growing world of audio games. But don’t assume that the fast-paced FPS genre is beyond them. As far back as 2003, AudioQuake became the first adapted mainstream FPS, making shooters accessible to blind and vision-impaired gamers.  As with any FPS community, there’s also a mod community making new maps and levels, which means the mainstream and blind gaming worlds have more in common than sets them apart. 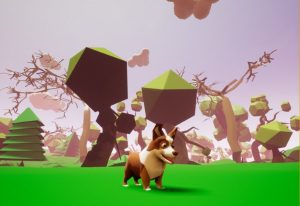 Meeting somewhere in the middle is Brian Fairbanks’s game about a rescue dog, Lost and Hound. Fairbanks, who is also the audio designer on Sable, has built vision accessibility  into Lost and Hound from the ground up. The game does have visuals, but they can be turned off. Instead, it relies on audio feedback to indicate obstacles, when the dog is running or walking and when the player is encountering open spaces. Accessibility is about a shift in thinking for developers and they need to consider it from the start, rather than making it an afterthought.

During development of my own game, Before I Forget, we have discussed accessibility from a fairly early stage. However, we didn’t go much further than looking at offering more options in the menu screen to turn off certain effects and considering colour-blindness. We didn’t really think about how a person with low visibility might navigate through our game. Our very limited budget means there are some things we can’t do, but learning about this gaming community is making me think about vision accessibility more, when starting any new projects.

One thought on “Sable: A Tool Helping Blind Gamers Make Their Own Games”