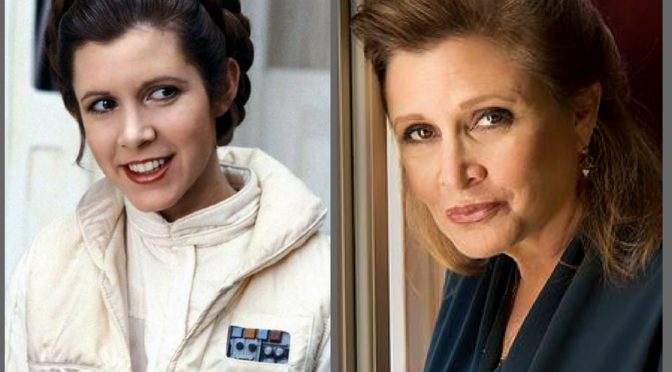 To boys she was a pin-up, to girls she was a hero and for all of us she was nerd royalty. I don’t cry when celebrities die, but I shed a tear when I learned that Carrie Fisher left us this week. The actress and writer best known for playing Princess Leia Organa in the Star Wars films died on Tuesday, aged 60, days after a heart attack.

Although she was many things, including a very talented writer, Carrie Fisher will always be known as Princess Leia and I think she came to terms with that, eventually. I count myself  lucky to be one of those girls who was just the right age to be around when a hero like Leia swept onto the big screen. A hero who influenced us all and became the icon she is today because of what Fisher brought to the role.

Princess Leia broke the princess mould – she was feisty, clever, powerful and handy with a blaster. Up until then princesses had been stuck in towers waiting to be rescued and married, in stories normally told by Disney. Leia changed all that.

Okay, Star Wars is a fairytale in space and Leia was the princess in the tower. When we first see her, she’s a glorified distress beacon relaying a message via R2-D2 and she’s being held captive. But once we see the whole message, we discover a political figure who is instrumental to the Rebellion. Leia was part of the Star Wars story way before Luke or Han ever enter the scene. In fact, she’s the catalyst for A New Hope, fighting for freedom from the Empire all the way through to The Force Awakens, where she is a General.

From the first moment we meet her, it’s clear that Leia is no damsel in distress. She doesn’t run in high heels and rather than rushing into the arms of her rescuer, she quips “Aren’t you a little short for a stormtrooper?”. She quickly goes on to question their planning and general ineptitude as rescuers, taking things into her own hands.

Carrie Fisher brought a warmth, as well as a toughness to the princess and a ‘don’t mess’ attitude, which made Leia a standout character and one I wanted to be. Even in Return of the Jedi, in the golden bikini slave outfit, which Fisher wished she’d fought harder against, Leia kicks back against the norm. Okay, so she’s chained up in a moment of sexual objectification,  but Leia rescues herself, by using the chain to choke Jabba and spends the rest of the film in trousers and in control.

Fisher’s talent as a writer came in handy on the set of Star Wars, as she took her red pen to George Lucas’s script, rewriting dialogue for many characters, including her own. This began her, largely, uncredited career as a script doctor in Hollywood, polishing the scripts for a long list of successful films, such as The Wedding Singer and Sister Act. She was also called in to doctor the Star Wars prequels, but they were obviously terminal and even Fisher couldn’t rescue them.

Carrie Fisher may have preferred to be remembered for her writing or her role as an outspoken figure for mental health issues and awareness, but Princess Leia is a worthy legacy too. Little girls like me had a hero that didn’t faint and didn’t sit around waiting for a husband. Unfortunately, Hollywood didn’t see fit to replicate Leia through the 80s  and 90s and her one-of-a-kind feisty female character was forgotten. It wasn’t until 1997, when Joss Whedon gave us Buffy the Vampire Slayer that I felt echoes of Leia again.

Games have fared even worse than films, when it comes to delivering female characters who are more than damsels in distress. We’re still struggling with the concept of games being carried by a female lead. This means Leia’s legacy is still important, as the younger female Star Wars  protagonists inspire a new generation of girls to put themselves and not men at the centre of the stories they tell.

Princess Leia remains the first real hero I had as a girl, but I’m sure it’s only because she was played by Carrie Fisher with all her wit, warmth, beauty, strength and flaws. And for that, I am thankful for all she gave us and truly sad to say R.I.P. Carrie Fisher.

2 thoughts on “R.I.P. Carrie Fisher and the Princes Leia Legacy”