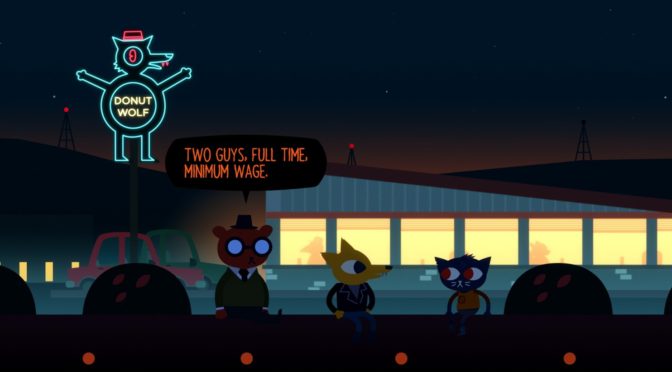 Night in the Woods is the indie hit of 2017, so far. The anthropomorphic mystery features the little black cat, Mae, who has dropped out of college and returned home to friends and family. I haven’t played the whole game yet, but the story begins with a simple bit of dialogue that hooked me in and it got me thinking about games and their opening lines.

Fiction writers are always told that the first line of their story or novel is one of the most important. That’s the one that hooks the reader and gets them to the bottom of the page and hopefully turning said page. Films have the advantage of an opening shot to tell the story, but they usually sock us with a great opening line to make sure we’re in for the ride.

Think of Goodfellas – “As far back as I can remember, I always knew I wanted to be a gangster”.  Not strictly the first line of dialogue, but it’s a great opener that kicks things off.  Then there are the great novels with memorable first lines like “It was the best of times…” (A Tale of Two Cities) and one of my favourites, “It was a bright cold day in April and the  clocks were striking thirteen” (Nineteen Eighty-Four).

A good opening should draw you in immediately and games tend to do that with cinematic intros. Gamers are often wooed by glossy graphics. This means a sweeping landscape or a figure with hair and clothes flapping in a dramatic wind can be compelling because we’re marvelling at the advance in graphics. However, the best game openings tell us something about character, the world and set the tone for the game in the most economical way possible. Night in the Woods is the perfect example.

“That’s just great.” From that one line we know Night in the Woods is going to be funny and quirky, with a dark element. Mae is disenchanted with her lot in life and feels like everything is working against her. As she gets off the bus in her home town, she’s disappointed to find that nobody has come to meet her. Of course, as this is a game, we’re half expecting something terrible to have happened. If this was The Last of Us, her family would be zombies, but it’s not. Her parents just got the day wrong and that’s the humour of Night in the Woods in a nutshell.

I’ve picked out a few of the best video game openings that use dialogue, rather than just visuals.

“Good morning and welcome to the Black Mesa transit system” – that’s the first line from Half-life. Out of context, it’s an unremarkable line spoken by an automated information broadcast. But from the simple train interior we are told a lot about the world without any exposition at all. And that’s good storytelling, right there.

The now classic Half-life opening puts us on a monorail system through the Black Mesa facility. We see workers and scientists, as the mechanical woman’s voice introduces us to how things work. There’s no music, just the train journey, but there is a sense of unease. Something is going to go horribly wrong and this is underlined when the voice tell us to “have a very safe and productive day”. Uh-oh.

“They told me ‘Son, you’re special. You were born to do great things.’ You know what, they were right.” Okay, so it’s a bit cheesy, but this is the opening to Bioshock and it’s an attention grabber, but the visuals then take it to a whole new level of intriguing, drip-feeding bits of the story. The retro music and images deliver a sense of melodrama as we plunge under the ocean, only to emerge from a plane crash surrounded by burning wreckage. Now that’s an opening.

“That’s my blood. That’s a lot of my blood” is the opening line for Uncharted: Among Thieves, which then leads into the epic train set-piece. Even if you hadn’t played the first game, you’d get Nate’s attitude from that line. Despite bleeding heavily on a train that’s hanging off the edge of the Himalaya’s this guy’s ready with some levity. He’s wincing, but without the earnestness of the humourless Lara Croft. And then we’re plunged into the action before playing most of the game in flashback.

Games tend to shy away from great opening lines, usually opting for explosions, bombastic scores,  a punch in the face or some generic dialogue and lengthy exposition. But now and then a game gives us a neat, memorable line that sets the scene and draws us right in Night in the Woods style.

Those are mine, tell me your best video game opening lines.