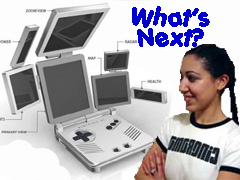 The year 2005 is a rooster according to the Chinese calendar, but according to the gaming calendar it's the year of the handheld. I know that the Gizmondo and the DS officially arrived last year, but the battle for supremacy is really only just about to start. Sony's PSP is going to turn up the heat as it tries to play Nintendo at its own game.

We European types are still eagerly awaiting the arrival of Nintendo's latest handheld and only those who really can't wait will be making do with the Gizmondo. For the aesthetes amongst us there can be no substitute for the slinky styling of Sony's PSP.

I don't know about Stateside, but the UK has been witness to some heavy marketing for the Gizmondo. In the lead up to Christmas you couldn't get away from the thing shouting about its imminent arrival. Then it arrived and all was quiet. There was one major flaw – there weren't enough Gizmondos to go round. Major stock shortages scuppered the launch before it even got off the ground.

Another glitch means that the new handheld has only launched with four games. It's claim to be the ‘Xbox in your pocket' could have people more than curious once it gets some big titles out. Nothing to write home about in the ‘coming soon' section of the Gizmondo website so far, but SCI and Microsoft have signed up, which is something I suppose.

Gizmondo.com does mention a game called City, which uses the machine's GPS to use the player's actual location in the game as they play. Sounds interesting, but I for one will need to know more before I fork out Â£229 ($419.12).

As handhelds go, the Gizmondo is on the pricey side of pricey. At $150, the Nintendo DS is much more affordable and about as stylish as Nintendo gets. Having sampled the delights of Feel the Music, I'm leaning towards the DS.

I'm pinning my hopes on the DS in fact. And this is because I'm fed up the fact that games for handhelds generally suck. It's true. Enter any gaming emporium and randomly pick five Gameboy games off the shelf and if you're really lucky, one of them might suck less than the other four.

The SP went some way in convincing everyone that handhelds aren't just for children. The fact that handhelds are generally perceived as being for children doesn't even begin to excuse the load of old tripe that gets churned out. Publishers just change the front end of the same game every three months to cash in on whatever license is in favour at the time.

Summer – quick bring out an X-men platformer. Christmas – all change for the Harry Potter platformer. And so it goes on. As the list of movies you never thought could be translated into a platform game grows bafflingly longer.

Now, I'm hoping the DS will force the industry into some form of innovation and creativity. Feel the Magic was a charming demonstration of how to use the dual-screen. Now it's up to developers to run with it and more importantly it's up to publishers to let them. The new and still unsettling Sega/Nintendo relationship could be the key to the imaginative gaming I crave.

The PSP is on Amazon for Â£179.99 and is certainly the most stylish of the three. Due out in March, it could be the Easter present everyone's dreaming of. I know people don't get Easter presents, but maybe just this once the Easter bunny could deliver more than chocolate eggs.

My one problem with the PSP is that its impressively long list of titles read like an "I've played that on console already" list. Need for Speed, Tony Hawk's, Tiger Woods Golf, FIFA 2005 – oh snore! This is a new console and all we're getting is the same old titles but smaller and not running as smoothly! And no I don't want really, really old games I used to play when I was a kid because it's always disappointing and it's just you being lazy.

I don't want Halo on handheld, I don't need it on handheld; it works fine on Xbox thanks. I want new titles made for, by, and about handheld gaming. The DS offers the most interesting possibilities and I'll be keeping a quiet eye on it to see if anyone is smart enough to take advantage of them. Blowing out candles on Feel the Magic was a great experience the first time round and I'm sure the DS has more delights like that in store for us.

Gizmondo is the clear underdog, which means it just might give us something unusual. You can never count Sony out, but my fear is that we're just going to get small console gaming – surely that's not the point. I have too many redundant handhelds to fall into this honey pot of a trap again. At least that's what I say now, but who knows what I'll be saying by the end of March. I guess there's nothing for it but to wait for the Fantastic Four platformer to come out and decide then.

Most played: Call of Duty