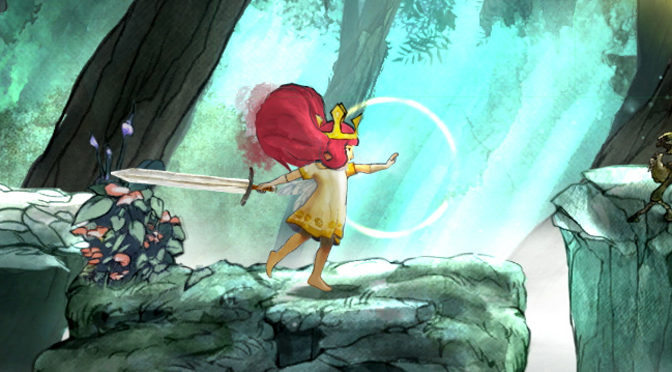 This week was a celebration of all things women, thanks to International Women’s Day 2018, marred only by the cry of ‘when’s International Men’s Day?’ For those who haven’t googled it yet (apparently that search team peaks on 8 March), it’s on 19 November. Put the date in your diary, so you don’t have to ask again next year.

Now, let’s get back to celebrating International Women’s Day. Here are some of the brilliant women behind some of the games we love. For last year’s list go here.

Tru Luv is a development studio that makes games for people who don’t like games. Chief executive and creative director, Brie Code, worked at Ubisoft, where she worked on whimsical RPG, Child of Light, which had a little girl with a sword at the centre of an adventure that would normally have been reserved for a boy. She also worked on Assassin’s Creed, the flagship Ubisoft service. Today, Brie is a voice for new types of games that don’t focus on violence, but instead put friendship, cooperation and love at the centre of the experience. She also gives inspiring and thought provoking talks at GDC and other events.

80 Days is the award-winning game from Inkle Studios, but with over 750,000 words in the masterpiece branching narrative, Meg Jayanth had a challenge as lead writer. 80 Days is praised for its writing, which won Jayanth a UK Writer’s Guild award, particularly its branching narrative and rich storytelling that evokes the world of Jules Verne without the tropes of colonialism. Jayanth also gives amazing talks on diversity in storytelling, so is well worth following for any aspiring game writers.

We all know that Monument Valley 2 was just as beautiful as the original game, but you probably didn’t know the woman behind this sublime sequel. Monument Valley is a much-adored game, so taking on the sequel must have been a huge challenge, one that Beatty accomplished with aplomb.

After working on the highly successful Firewatch, at Campo Santo, Jane Ng is now hard at work on their next game, The Valley of Gods. The game features two women of colour and Ng is a hero because she’s made it her mission to render natural black hair texture at the tightly curled end of the spectrum (4b/c to be precise). Natural afro hair textures are largely absent from games, so black characters get straight hair, braids and dreads, which doesn’t represent our hair fully. Ng is taking on the challenge and you can follow as she updates on progress via Twitter and the studio blog.

Hazel attracted the attention of the director on Dishonored when she wrote a Twitter thread about the Outsider, a character from the games and compared him to the ancient Greek ritual pharmakon. As a result, she was hired as one of the writers on the standalone DLC Dishonored: Death of the Outsider, which puts Billie Lurk from Dishonored 2 in the protagonist’s chair. Hazel is a seriously highly qualified writer, with a first class degree in English and Creative Writing, a master’s from Oxford and a PhD underway at Durham University. If anyone can compare a video game character to social rituals from the ancient world, it’s Hazel. Interesting side note: Hazel was just one of a writing team of four women, so kudos to Arkane Studios for that.

Bioware is known for its masterful storytelling, but Sheryl Chee has a strong fan following for her writing on Dragon Age and Mass Effect: Andromeda. In particular, Chee fans appreciate her LGBT characters, including Isabela (Dragon Age) and Vetro (Andromeda). At a time when representative storytelling is a hot topic, writers like Chee make all the difference for gamers who just want the simple pleasure of seeing themselves in the games they love.

As always, if you have games made by women (including trans and enby/non-binary) to recommend, please leave a comment and I’ll add them to next year’s list. This list is the tip of the iceberg, so please tell me about the women I’m missing.