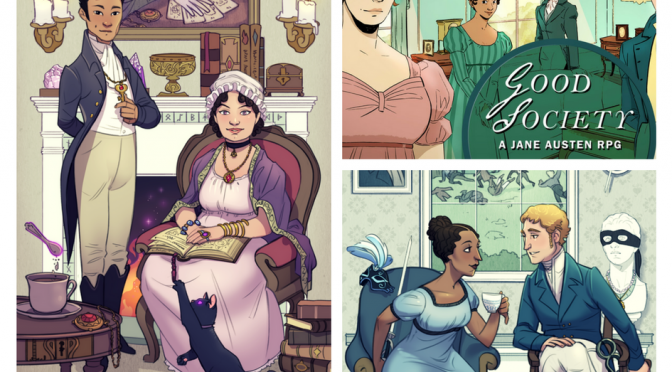 I’ve been a tabletop roleplayer for many years, but it wasn’t really something you discussed in videogame circles. Gaming was cool, but DnD and roleplayers were like the less evolved cousins of gamers _ the Luddites with their dice and whatnot. Then king nerd, Will Wheaton started his tabletop gaming web show and Critical Role introduced a whole new audience to roleplaying.

People who don’t knew anything about roleplaying now know if from Big Bang Theory. And references in Stranger Things mean it’s no longer mocked as weird. And with this newfound popularity, developers are releasing new experiences and genres.

A Good Society is one of the more interesting roleplaying games soon to hit tabletops. This Regency romance is based on the world of Jane Austen, so expect balls, tea parties and turns in the garden. Made by Australian team, Storybrewers, game had a very successful Kickstarter campaign earlier this year.

It seems that demand for RPGs that offer more than epic fantasy, sci-fi and cyberpunk romps is high. With an initial target of AU$ 4,000, A Good Society smashed through that to a final total of AUS$ 154,774, reaching all stretch targets. This means the final game will include combat (for duels, yay) and magic, based on novels, such as Jonathan Strange and Mr Norrell, as well as Glimmer and Glass. Add ons also include a beautifully bound book with tarot size cards.

I’ve had a chance to test play an early version of A Good Society and it stands out for several reasons. First the art for the game is beautiful and diverse and inclusive characters. Unlike most BBC adaptations of Austen, A Good Society includes black and Asian characters. Also the illustrations include different body types and no oversexualised women. So we’re off to a very good start.

The second thing to note is that this is a diceless game focusing on story and character. If you’re into Pathfinder style dungeon crawls or you’re all about min maxing, then A Good Society isn’t for you. However, if you prefer roleplaying with voices and deep storytelling, then step right this way.

Discard all notions of standard RPGs as there is no GM and no pre-written campaign. Basically, the players create the story as they go, which sounds like a recipe for disaster, but actually, it works.

The GM is the Facilitator, which means they help players by asking questions and throwing the occasional narrative spanner in the works to get the plot moving.

One of the best things about A Good Society is the collaborative aspect. Everyone decides what level of historical accuracy and seriousness they want. We used pregen characters, which still allowed for tailoring using traits and backstory. Then every character is given a secret and a relationship with another player character. The character generation is fun, but takes a while so you’ll either need a long session or at least two 2-3 hour sessions to allow for character gen and playing.

A Chapter is set in one place, such as a ball or a picnic and allows the Characters to chat. After each scene, players then take it in turns to start or confirm a rumour; perhaps Emily is set to inherit or perhaps Ashok has gambling debts. At this stage, the players are also supposed to decide whose reputation has taken a tumble and whose star is rising, but as Facilitator, I completely forgot about it. However, it didn’t ruin the game and this stage is where the going engine gets going. And then because it’s Jane Austen, players get to write a letter which is really a monologue that reveals their internal world. The epistolary section is really great fun because you can unleash your most florid language and sign off in very dramatic ways with things like ‘forever your most loving friend’. Then it’s time to move on to the next scene and repeat the stages again.

One aspect of the game that we all struggled getting to grips with was the ‘resolve’ tokens, which allow players to change aspects of the story, such as new background events or causing an event, such as a carriage accident. We did use them, but it didn’t always feel like we were using them in exactly the right way. I know that the player guide is being tweaked to ensure gameplay elements are clearer, so looking forward to seeing the complete game.

For a first time playing a completely new system, all the players had a really great time, including complete roleplaying novices and experienced players too. By the time we got through character gen, we didn’t have much time to sink into the game. However, in an hour or so we ended the evening with a fairly complex plot and promise of a budding romance, which was very exciting. We didn’t have time for a second round of chapter and epistolary, so I don’t know how the ending system works, but everyone was keen to jump into another session and one of the players became a backer.

If you want a new kind of roleplaying game for your group, I highly recommend A Good Society. It’s light on mechanics, leaving plenty of room for organic, cooperative storytelling, which is just really good fun. Plus, everyone needs more Regency in their life.