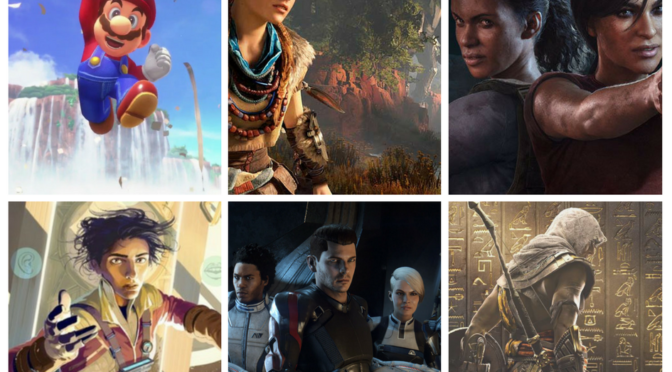 2017 was the year that saw us reeling from the fallout of a Trump presidency, Brexit and the Harvey Weinstein revelations, with one of the few lights being the promise of a royal wedding in 2018. Meanwhile, the games industry has its own share of ups and downs, so without further ado, let’s get down to the gaming highlights of 2017 (and the lows).

Indie game stars 2017
The year kicked off in style, with the launch of indie hit, Night in the Woods. This stylish, beautifully written game had iconic art and characters, with a quirk story that was part supernatural weirdness and part examination of teenage ennui. It was brilliant, people made felt and fabric fan art. What Remains of Edith Finch is hitting many best game of the year lists and deservedly so. This masterclass in narrative and gameplay design, all wrapped up in American gothic atmosphere makes it a must play. The Gone Home team delivered their space station mystery Tacoma, which didn’t quite hit the same high notes as their first game and late entry Gorogoa delivered gorgeous art, married with ingenious puzzle design.

Horizon Zero Dawn
The far future dinosaur robot adventure from Guerrilla was a slick, openworld adventure and a new IP. Horizon Zero Dawn’s gorgeous landscapes and intricate world-building, along with the fun gameplay made for an intoxicating combination. Aloy wasn’t the most compelling lead, but maybe future games will develop her character a bit more.

E3 announces Beyond Good and Evil 2
“At last” we all cried. This year’s E3 delivered confirmation that Beyond Good and Evil 2 isn’t a fevered fan dream, it’s real and it’s happening. There was a trailer. It was exciting and beyond beautiful, with a black female character front and centre, complete with natural hair texture. Release date unknown, but it is happening. Soon.

Mass effect Andromeda and the death of single player
Mass Effect Andromeda was one of the most anticipated games of the year, but failed to live up to the hype. The story wasn’t great, despite some beautiful new character design. In addition, the overwhelming sense of colonialism meant the heroes didn’t feel particularly heroic. As a result of the poor reception, EA announced that the series is being put on ice with no DLC for Andromeda. Shortly after that EA announced that it was shutting down Visceral Games. In addition to inevitable job losses, EA’s decision also saw a shift in focus for the narrative led single-player Star Wars game the team was working on. Helmed by Amy Hennig, of Uncharted fame, this was a Star Wars game adventure fans were looking forward to.

EA’s move caused a flurry of headlines announcing the death of single-player games. However, the growth of indie and the success of Horizon Zero Dawn and Nier: Automata indicates that there’s room for solo and multi-player experiences.

Pewdiepie did it again and again and…
2017 was also the year that YouTube star Felix Kjellberg, otherwise known as Pewdiepie hit the headlines several times this year, as his brand of humour began to look a lot like racism and bigotry. Earlier this year he was dropped by Disney for sharing ‘anti-Semetic’ content, but not content with that he used the n-word on a live streaming video. There was the usual outrage and his defenders also jumped into the fray. Developer Campo Santo was one of the few to step up and demand he take down any videos featuring their games. At the end of 2017, he is no longer the highest earning YouTuber, but still took home a tidy $12million. Here’s hoping that going into 2018, Kjellberg will have a less lucrative relationship with the games industry.

Loot boxes
When EA introduced loot boxes to Star Wars Battlefront 2, it started a storm that’s still raging and now the Gambling Commission, in the UK, is getting involved. Gamers are prepared to accept some micro transactions, but not if it feels like you can’t progress without paying. EA got the balance wrong on Battlefront 2 and the backlash was so fierce that they backed down. Worryingly, there are now signs that some people are conflating loot boxes and video games with gambling games. Tabloid headlines have been screaming about kids lured into gambling by video games. But if we take a deep breath and consider that loot boxes are basically bubble gum cards, but in a game. You buy it without knowing what’s inside and hope you get the item you want. You win some, you lose some.

Nintendo Switch saved us all
In all the doom and gloom of the real world, gamers needed something magical and wonderful and fun. Enter stage right, Nintendo Switch. It was the games console that sounded like an eccentric risk on paper. I wasn’t convinced, but Nintendo fans were and you were right. The Switch sold 10 million units in its first nine months, smashing predictions. Admittedly, forecasts were low, following the Wii U, but the Switch was a wild idea that works. Added to that it has two of the best games of the year, with Legend of Zelda: Breath of the Wild wooing everyone with its beauty and effortless gameplay and Super Mario Odyssey delivering one of the finest Mario games yet.

One of the sillier moments of the year was when journalist, Dean Takahashi, innocently uploaded a video of himself playing Cup Head badly. He thought it was funny, but that small pocket of the internet thought it indicated the end of video game journalism or something.

But let’s get back to the games.

2017 was a stellar year for games, from one end to another, which means there are far too many to mention, but the Argue the Toss awards episode covers many of the highlights. However, we didn’t talk about Hellblade: Senua’s Sacrifice, which tackled the serious topic of psychosis with sensitivity, all wrapped in a compelling game. Assassins’ Creed: Origins took the series to Africa and was a return to form for Ubisoft’s historical adventures. Uncharted: The Lost Legacy proved that we don’t need Nathan Drake to have fun stealing treasure from around the world. Nadine Ross and Chloe Frazer made for a compelling duo with the added bonus of being two women of colour, fronting an excellent game.

On mobile, Monument Valley 2 was as elegant and mesmerising as the first game, whilst Dream Daddy had everyone dating over the summer and Animal Crossing: Pocket Camp is definitely going to be the one to play while the sprouts are boiling on Christmas Day. The rest of Christmas is going to be spent catching up on all the other great games we missed or failed to finish in 2017, which can only mean we’ve been spoilt for choice. See you in 2018.