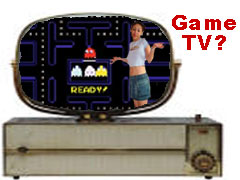 Gaming is so popular its mainstream apparently. Videogames have been on the next big thing list for some time now. According to the trendsetters (or people who invent trends that don't really exist, anyone remember the puffball skirt?) we should be the hippest young things around. London is heading towards this year's Gamestars Live consumer show, a live event spawned by a TV show of the same name. It's got me wondering about all the TV shows covering videogames and why they are always crap.

Gamestars is a TV show that's supposed to celebrate the videogames industry – a gaming Oscar night if you will. A dazzling array of famous gamers is wheeled out, which usually consists of fat comedians and Big Brother losers. The speeches are usually cut because obviously nobody wants to listen to the games PRs accepting an award for something they had nothing to do with. It makes for pretty bland viewing, but strangely, has established itself as an annual event on the gaming calendar and TV schedules.

There have been numerous TV shows dedicated to videogames, but none have managed to capture our imagination or ratings. The latest rumours are that Gamepad, a fairly well established UK show, has been axed. Hosted by the lisping Violet Berlin, amazingly, the source of many a boy's sexual fantasies, Gamepad succeeded where many have failed. But is seems, even that has failed to convince the TV execs.

Gamepad was a show I loved to disagree with. Most of the time you wondered if Violet had any idea what she was talking about. She regularly misinformed viewers and the reviews were either overly kind or just wide of the mark. It was more a question of seeing what tosh she was going to come up with next, rather than tuning in for some informed programme-making. To be fair, Violet Berlin's been in the industry for donkey's years, so she must know something. But for some reason it just didn't come across on screen.

There's no getting around it, TV and videogames have not made a beautiful friendship. Part of the problem of course being that it is inherently dull watching someone else playing games. Add to that a complete muppet trying to talk you through the experience and it's time to watch paint dry.

If they can make programmes about movies, then why are games proving so tricky? Looking at the format of a movie review programme, you get clip of movie, review of movie and interview with star or director.

The problem with games is there are no celebrities. And no, former Lara Croft models don't count, despite common misconceptions. There only so many cut scenes you can dissect to pad out a TV show. Interviews with Japanese game creators and translators also have their limits and then there's the problem with developers. What do I have to explain? It's like the gaming equivalent of working with kids and animals – don't do it.

One of the other problems is TV folk seem to deny that most of the people that buy videogames are aged between 18 and 35. Videogame shows are usually aimed at kids, involving onscreen competitions and lots of thumbs up grinning to camera. Thumb Bandits was one of the first shows that realised who it is that actually plays games. It managed to combine the right mix of informed opinion with fun and irreverence.

The show's hosts were both respected figures with enough celebrity to raise themselves above the role of hardcore hobbyists. Less The Home Improvement Channel and more MTV. Unfortunately, Thumb Bandits never made it out of the post pub, Friday night, late spot. And now it's been sent to the videogame TV show afterlife.

The latest incarnation is Gamezville. The well-placed ‘z' is enough to belie the show's determination to appeal to yoof (sic) culture. Sadly, it also belies how misguided TV execs can be. The show's hosts are streetwise, mouthy types who look like celebrity footballers. Once again, onscreen competitions are the name of the game. The reviews are pitiful and show how scared they are to give anything a low mark in case the publishers just refuse to supply their games.

Surely, it's possible to make a show about videogames that isn't aimed at the lowest common denominator or explain the magic behind motion capture. Hello – hardly cutting edge stuff. I think we should get videogames on Newsnight Review, described as the BBC's weekly cultural round-up. It features a panel of celebrity intellectuals such as Germaine Greer. They already do movies and conceptual art, so it's just a short hop into the world of gaming. I think we'd all love to hear Germaine Greer's feminist take on Mario Golf.