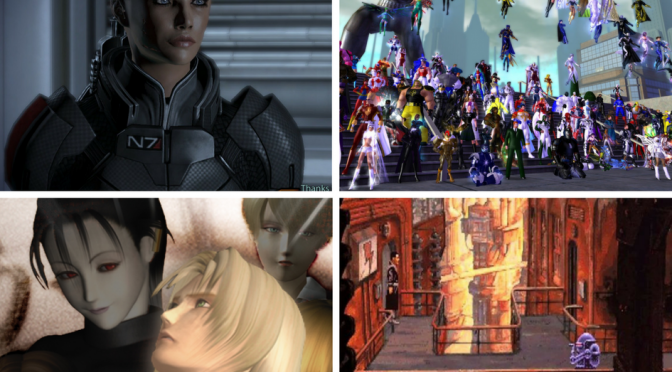 This week there was a hashtag, which started as a film hashtag asking people to tweet the films that define them and became the gamer hashtag #GameStruck4 – four games that define me.

I always struggle with these lists of  a small number of things that ‘define you’.  What does ‘define you’ mean? What invariably happens is you choose one meaningful one and then happen upon some favourites, but then stop yourself because are your favourite games/films/ books or whatever the same as the ones that define you? Regardless, I’m going in and picking just four games that mean something more to me than merely being my favourites or being brilliant.

Beneath A Steel Sky

No surprise to anyone who knows me because I’m always banging on about this game, but it was significant, okay. Give me a break. Up until this point, the only games I’d played were things like Frogger, Pong, Mario and Donkey Kong – all good games in their own right – but when I met Beneath A Steel Sky I found a game with great writing, an engaging story and it was funny. It also looked fricking amazing and it had regional British accents. This was the game that made me a gamer.

Shadow of Memories is a weird Konami title from 2001 that most people probably don’t remember, but I think about often.  I still have my copy of the game for Xbox, but, sadly, don’t have an Xbox to play it on. This atmospheric time travel game tasks you with preventing the murder of the main character by skipping back sometimes hundreds of years to alter the timeline. The game takes place in a small German town, but over the course of the game you travel to the 1500s and 1900s and get to know the town and its people and also alter all of their lives, as you change the whole continuum over and over, adding layers of complication to the story. It was a really unique game for the time and has a haunting quality that stuck with me.

Okay, so not one game, but one trilogy. I can’t separate them, I just can’t. My black, fem Shep was a joy to me and my epic love affair with Kaidan remains one of my gaming highlights of all time. I found him in episode one, lost him in two and spent the whole of three trying to win him back. I had sweaty palms and my heart was racing, not because the whole future of the galaxy hung in the balance, but because any wrong dialogue choice and my future with Kaidan would be over. Reader, I died (kinda), but Kaidan was okay, so phew.

One MMO to rule them all and that’s City of Heroes. The lure of becoming a superhero was just too great for me. I bought the game, but it wouldn’t run on my laptop, so I bought myself a £2k computer and never regretted it for a moment. Standing in Paragon City watching all the supes zipping around, admiring people’s outfits and gazing up at the huge statues of the city’s heroes was one of the greatest moments for comic nerd me. City of Heroes took up a year or more of my life and still has the best character gen ever. I made friends there and still talk to one of my City of buddies, ‘Demonika’. I laughed, I cried, I roleplayed through many hours on that game and I returned to Paragon City to watch us all blink out of existence, when they switched off the servers. A sad day indeed.

Those are the four games that define me. What are yours?

One thought on “Four Games that Define Me #GameStruck4”