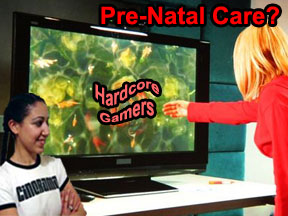 This year's E3 didn't give us that much food for thought, but it did bring us news of motion technology projects from both Sony and Microsoft. If nothing else, this has left the industry bickering over the significance of these announcements. Microsoft says Natal will change the industry. Sony says Natal is just Eye Toy by another name. And Nintendo shrugs its shoulders and welcomes them to the fray. Meanwhile, gamers are left wondering what it all means for them.

When I saw Peter Molyneux demo Milo, using Natal technology, I have to say I was excited. I know Molyneux is big with the promises and rarely delivers on quite the same scale, but you've got to love his enthusiasm and boyish excitement for everything he does. For those that have failed to watch the demo, Milo is a digital boy who appears to recognize faces, tone of voice and movement. He appeared to be engaging with a real life woman, reacting to her comments and "emoting."

Okay, so Milo is really a glorified extension of what we've already seen in the brilliant Seaman, on Dreamcast. But this time it's not just reacting to your voice, but recognizing your face too. The real star of the show was when the woman talking to Milo walked towards the screen and saw her own reflection in the digital pool. She then moved her hands around, causing ripples in the water. Later she drew a fish on a piece of paper, held it up to the camera, Milo grabbed the drawing on his side of the screen and recognized it. Wow. Or maybe not.

The Milo demo drew jeers from the virtual crowd. Forums bristled with people claiming it was one of Molyneux's latest smoke and mirror tricks. I was a little taken aback at the lack of real enthusiasm from some corners. On first seeing it, I thought this is where we need to go. People are saying it's little more than an Eye Toy and others shout ‘fake.' It seems a little bizarre to assume that it's all a sham. I think they might get found out if it's all pretend.

Rather than poo-pooing the whole affair, I began to imagine what Halo would be like as I parted the grass with my hands, lying on my stomach, trying to hide from Flood. How I could actually go swimming in that lake in Oblivion. And don't get me started on the multi-player or MMO experience.

It seems that Microsoft has other plans for Natal in the immediate future. There is huge potential for Natal as part of the hardcore gaming experience, but this doesn't seem to be Microsoft's focus. It looks like Natal is destined to become Microsoft's Wii-mote beater. Does this means we can expect to be treated to a succession of lame party games? I sincerely hope not.

Shane Kim, corporate vice president of interactive entertainment for Microsoft, made the direction of Natal clear in an interview with Gameindustry.biz, "Our focus this E3 has been breaking down barriers." He continued, "We know the controller remains a barrier for people. That's what Project Natal is all about." In not so many words it's about the people that don't play games at the moment, not the hardcore.

The fact is, Molyneux could be our only hope, which isn't really any bad thing. Imagine how great it would be to pull your own faces in Fable or play ball with the dog. You can bet your right arm Molyneux's thought of that and more besides. In addition, Kim did admit that all Microsoft's internal studios and dev teams are working with Natal to create games using the technology or at least introduce it into certain aspects of the gaming experience.

Natal is going to be used in hardcore games such as Gears and Halo, but the sad news is we may have to wade through Charades Hero or Pin the Tale on the Digital Donkey style titles first. The hardcore are taking a backseat as far as Microsoft and Project Natal are concerned, in the short-term anyway. Let's just hope it's worth the wait.

I guess the upside is that gives Molyneux plenty of time to create his masterwork. Sony seems to be the only one claiming to be looking after the hardcore, but that could be because we're the only ones crazy enough to re-mortgage the house for a games console.

My advice to the big three is, don't forget the hardcore, after all it's those dedicated gamers who got you where you are today. Do I want Facebook on my games console? No. Do I want great games, using amazing technology? Hell yes!