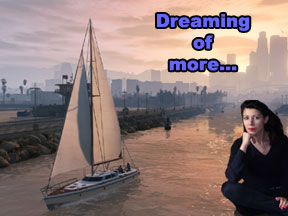 Okay, so by now, even if you haven’t played it yet, you’ll know that GTA V is epic, in the running for every game of the year award going, not without controversy, violence or humor and is smashing new world records every week. There’s no denying that GTA V is a technical marvel. I still haven’t opened up the whole map and I haven’t even scratched the surface, when it comes to in-game distractions. But I’m still not satisfied. I want more RockStar. Are you listening?

Despite all the toys thrown into the GTA V sandbox, I still found it lacking. Here are the five things I wanted to see in GTA V, but didn’t get.

I’m a real life surfer. Yes, wax on, wax off and all that. I’m talking 9ft surfboard, wetsuit, the whole thing. So, imagine my delight when GTA V dished up the best videogame water I’ve seen in many a year.

The sea in Los Santos, actually looks and acts like…er the sea. And, to top it all, the beach is scattered with surfboards. There I was, on the boardwalk as Franklin, on my first night in L.S. I run straight past the jet skis – pfft, don’t waste my time. Off I go to try my hand at surfing. Alas and alack, it wasn’t to be. Those surfboards are just there to trip you up, when you’re running away from the police, having committed a minor felony. Tsk, tsk GTA guys. If we’re going west coast and the water looks that good, then you’d better deliver surfing.

I’m not generally a sporty person. I don’t do team sports and I definitely don’t watch sport on TV – that’s frankly pointless because you don’t even get fit doing it. However, when I’m hanging in the hood as Franklin, I’ve got an urge to shoot some hoops.

Somehow, Franklin doesn’t strike me as a tennis kind of guy. Just check his wardrobe and his neighborhood for signs of a tennis club. Plus, I can really see Michael and Franklin bonding on the local, outside basketball court.

Of an evening in L.S., I like to cruise the streets, maybe head to the beach for a stroll at sunset. I hear music pumping from a waterfront restaurant or bar. I search for a door, but none are available to my character. What’s with that RockStar?

Yes, I can go and have a drink at that dingy, downtown strip club, but excuse me if I decline such a salubrious offer. I want to be able to hop into an establishment for a drink. Maybe hit the bar of a swanky hotel and see who’s around or swig moonshine with some desert dwellers. Call me needy, but I’d just like a little cafe culture.

It was especially disappointing that even the few places you can purchase in the game, like The Hen House, don’t allow you to actually go inside even after you’re the owner. You would think that buyable areas would be frequented by players, so there might be a bit more to them. Given that GTA IV’s The Ballad of Gay Tony had a complete nightclub that you could actually dance and work in, it should not have been that difficult to flush out a couple more interiors for GTA V.

It’s somewhat puzzling how a game that is so preoccupied with guns and carjacking can dish up such a shonky aiming system. I’ve been at the shooting range. I’ll admit, I’m not the best with a virtual gun, but GTA V isn’t helping me out at all.

Picture the scene with me, if you will. So you’re walking down the street and an altercation takes place. Maybe you punch a guy because he told you to ‘chill brah’ and Trevor takes exception to that kind of thing. Maybe you punch him too hard and he dies. Maybe his friends call the police and the next thing you know, it’s gun-o’clock. You pull out your gun, only for your minute crosshairs to blend into the background. Then when you do find it, it’s pointing at the underside of that bridge. Oh no, you died. I shouldn’t have to rely on auto-aim, really I shouldn’t. Changing the crosshairs to classic mode helps a little, as they are easier to see at least.

GTA hasn’t really changed that much over the years. Yes, it’s prettier and bigger and there’s more of everything, but it’s still, essentially the same game. You could ask, why reinvent the wheel? But you could also say, why not take inspiration from developments in other games?

I try not to dwell on the lack of positive female characters. I think the subject’s been handled well by other writers, so I don’t need to reiterate. However, RockStar could explore character a bit more. The three leads are given nice moments together, adding depth to their characters. However, when it comes to Franklin’s aunt and particularly Michael’s family, there were some missed opportunities.

Quite often, Michael walks into the house and his family is either at the dining table or his son is in his bedroom. The first few times, I tried talking to them, but they just sat there. They didn’t even acknowledge my presence. Likewise, Franklin’s aunt remained on the sofa, applying a face mask when two guys ran into the house and shot me, in the kitchen. In my own kitchen! She didn’t scream, she didn’t do anything. She didn’t ask how I was, when I got back from the hospital and it hurt.

These instances pulled me out of the game and surprised me. With games like Mass Effect and even RockStar’s own Red Dead: Redemption giving more opportunities for interaction between characters. Hell, RockStar could even introduce some romance into a GTA game. No, paying for hookers doesn’t count. I know – romance? In GTA? I’ve really gone too far now.