This week the games industry focused on the noise and bombast of E3. One of the biggest events on the gaming calendar, E3 is an onslaught of headlines and trailers. It’s all about the business of games and then, after it’s all over, the media and fans discuss who “won” E3.  Amongst all the brash fanfare of the E3s of this world, there’s space for a quieter type of games conference. That space is nestled in a beautiful wooded valley in the north of England and the conference is called Feral Vector.

Tucked away in the bustling and artsy town of Hebden Bridge, in Yorkshire, Feral Vector describes itself as “a festival about games and gamelike things”. I considered going last year, but the photos portrayed a bunch of white hipsters larking about in the woods. As a person of colour, it might not have been an inviting space and  I decided not to go. It wasn’t until I met festival organiser David Hayward, who also organises the Leftfield Collection at EGX Rezzed, and mentioned my misgivings about Feral Vector that he told me he was aware of that image problem and looking for ways to change it.

Fast-forward a few months and I was on my way to Feral Vector via three trains, taking me from the South West of England to the North East. My mission was to present a talk on ‘Afrofuturism, Black Panther and Creating Meaningful Black Game Characters’. From the moment I announced my talk on Twitter, to the days after I’d given it, the enthusiasm of the Feral Vector attendees underlined the festival’s focus on broad thinking and inclusivity.

The event is small, cosy and filled with a passion and enthusiasm you just don’t feel at more corporate games events. After trudging up the hill from the station, you enter the heavy wrought iron gates of the former baptist church, weave past the rhododendrons and up to the steps of the hostel, where people are sprawled on the grass chatting. 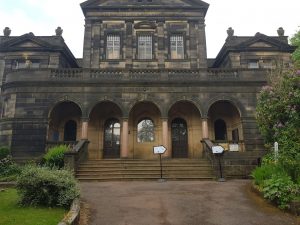 Next door, the beautiful converted chapel hosts talks and workshops. This year talks ranged from a discussion about burnout, the perils of the literal translations western games get when they are localised for the Japanese market.

There was an interesting presentation on female-led mod communities, with throwbacks to the Petz games(z) and a fantastic recreation of Versailles in the Sims. One talk ended with a 10-year old girl leading people in a slime-making demo. And I’m sad that I missed out on the gamelan talk by audio designer and composer Jade Leamcharaskul, which had the room clapping out rhythms, apparently.

There are games available to play, such as the Bitsy Boutique, Quiet as a Stone and Phogs, with bean bags and little installations dotted about the place. However, the highlights of the weekend are definitely the bizarre and completely unique LARPS.

Feral Vector’s Business LARP is the real star of the show, with a new episode being played out in the woods each year. It’s a satirical take on the corporate world, wrapped in a surreal dystopian fantasy and it’s hilarious. As a freelancer charged with bizarre tasks in exchange for “exposure”, I jumped at the chance to join the underground green revolution, which ended with us meditating on nature, whilst the capitalists hollered and screamed in another part of the woods.

On day two, the LARP was another flight of fancy called, ‘Jeff Goldblum Is Concerned About Your Academic Progress And So You Must Tend To His Menagerie Of Gentle Mutant Abominations’. Presented by Xalavier Nelson, this was less active than Business LARP. We gathered around and engaged in communal storytelling in the woods. The game used three active players at any one time, with Xalavier as the deft storyteller, reacting to the players’ decisions and switching new players in at certain points.  Body shock whimsy was the order of the day, plus Jeff Goldblum (Xalavier), so all win.

There’s an overwhelming sense of kindness and thoughtfulness about Feral Vector that makes it a relaxing place to be. Not everyone doing talks was part of the games industry, but they operate within the intersections between games and mental health, play and culture.  There’s a focus on inclusivity and understanding that I’ve only experienced at Nine Worlds, a geek con built on diversity.  Feral Vector also includes quiet spaces offering low lighting, fidget spinners and meditative games, as well as a clear code of conduct.

Because Feral Vector isn’t the usual kind of gaming event, it struggles to get funded every year. In 2015, it ran at a loss and this year, David and the team only just managed to pull the funds together. The games industry fails to support this special event, every year. Publishers spend more on their E3 stand (one event of many throughout the year) than it costs to fund the whole of Feral Vector for a year or possibly two.

Feral Vector is about the culture of games and play and playfulness, rather than the business of games. The dominance of short-termism, means the industry fails to see the value in Feral Vector, which basically nurtures the grass roots of our creative industry. Without roots, nothing can grow. We can’t continue to make money from the same old thing, which is why a festival that reminds us of the breadth of experiences games can deliver is vital for the future of the industry.

Maybe Feral Vector is better off without corporate funding and the constraints that would undoubtedly come with that. Maybe it just needs sympathetic patrons to ensure we always have a Feral Vector to remind us that the games industry isn’t just about shifting units and that games and playfulness are valuable for their own sake.

Feral Vector is now a firm fixture on my gaming calendar because it reminds me why I’m in this industry in the first place – fun and creativity.