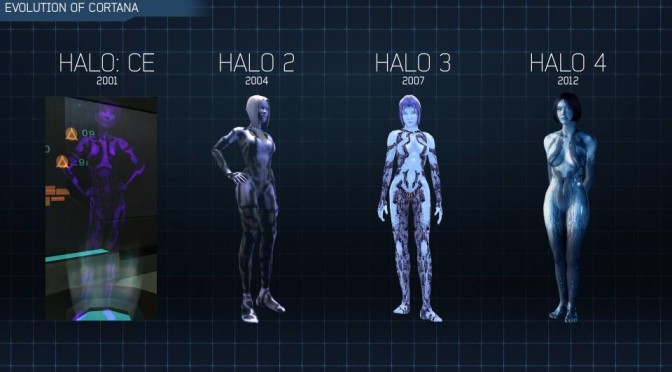 I’m a bit late to the party on this one, but I couldn’t let it pass without mention. Halo 5 launched last week and with that came a bizarre announcement regarding Cortana, the blue A.I. from the Halo series. In an interview with Gamesradar, Frank O’Connor of 343 industries revealed a backwards (in more ways than one) engineered reason for Cortana’s nakedness.  Apparently, she’s not naked, it’s all an illusion.

First, let me say, Cortana’s look has never really bothered me one way or another. It would seem odd for an A.I. to have clothes, so as long as the male A.I. were “naked” too, it’s all good.

However, not all Halo universe A.I. are naked. In fact, Cortana is the only one, as far as I’m aware. We had Roland, who dressed as a World War II, British pilot, for some reason and there have been others in the universe, but they had clothes.

Someone, somewhere along the line asked 343 why Cortana is naked and they scratched their heads and came up with this gem…

“Firstly, she’s not actually nude, because she has neither clothes nor private parts. She’s effectively just wearing a kind of holographic body stocking…However, like you said, that’s what it makes you think of.”

So, she’s not naked, but the way it looks just makes us think she’s naked. Plus she’s a hologram, so can’t, technically, be naked. Okay.

“One of the reasons she does it is to attract and demand attention. And she does it to put people off so they’re on their guard when they’re talking to her and that she has the upper hand in those conversations.

“It’s kind of almost like the opposite of that nightmare you have where you go to school in the nude, and you’re terrified and embarrassed. She’s kind of projecting that back out to her audience and winning intellectual points as a result.”

This is where it gets sketchy because he sort of admits that Cortana is naked and does it to ‘win intellectual points’. And I don’t know about you, but being naked is always the most intimidating thing a woman can do.

If we’re going with the A.I.s  can’t technically be naked, plus it’s empowering anyway, then male Cortanas would look something like this…

But instead we get this…

Note how he’s fully dressed and even a little tubby, rather than a male sex pot. But 343 explains this gender disparity away with some flange about Cortana being different.

Really, 343 wanted a sexy Cortana, but now they’re trying to pretend they had a good reason for her curves and nudity. And that’s just annoying, nay, insulting. Do they think we’re fooled?

Ironically, a 343 industries developer criticised Metal Gear Solid: The Phantom Pain for the design of the character Quiet, who spends the game in a barely there bikini top.

Maybe 343 has been taking tips from Hideo Kojima who explained his character, Quiet’s lack of clothes with some twisted logic. When people questioned her skimpy outfit, he responded with “I created her character as an antithesis to the women characters appeared in the past fighting game who are excessively exposed. But once you recognize the secret reason for her exposure, you will feel ashamed of your words and deeds.”

The secret is….she breathes through her skin, so clothes would actually suffocate her. Problem solved. Hence the ripped tights and bikini top, rather than breathable fabrics in a world of high tech military gizmos.

I for one shed no tears, when Kojima left Konami, as it means the Metal Gear series may get to proceed without his childish fixation with boobs and girls in bikinis. It’s a shame that an otherwise admirable series is marred by Kojima’s schoolboy approach to women – huuurr, she got boobs.

Games are still in love with the idea of the fembot, which is why A.I.s like EDI in Mass Effect and Cortana are curvacious, scantily-clad women. I don’t have a huge problem with the sexy A.I., but I do object to the ridiculous reasons developers dream up, thinking we’ll be fooled. And I do object to almost everything Kojima ever says on the subject of women in his games. He needs to grow up and recognise that he’s not making games in a cultural vacuum. He’s in a global industry, so the ‘it’s a Japanese culture thing’ doesn’t wash any more.

I take heart in the fact that Cortana’s nudity and Quiet’s undress are cause for headlines. The industry is growing up, with or without Hideo Kojima and the apologetic mumblings of Frank O’Connor.