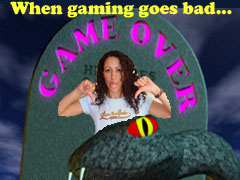 Games Piss Me Off!

Is it just me, or are videogames really, really annoying? There are times when I wonder why I spend my life on an activity that sets out to annoy me. No, I haven't suddenly descended into some sort of paranoid psychosis. My family aren't all aliens and the government's not after me, but games are made to piss me off.

Take last Sunday afternoon as a case in point. We'd just had a great lunch, so feeling full of the joys of spring we decided to play a game. At this moment, I would like to point out that Konami Boy and I had spent the entire previous Sunday playing Beyond Good and Evil. It seems only reasonable to expect we could do the same thing a week later. But oh, no, the gods of gaming had other ideas.

No sooner had I started, than I knew it was a bad idea. Even the simplest of tasks seemed to irritate. All of a sudden the game's flaws were overbearing and hindering all enjoyment. Every little annoyance was magnified and only served to irritate us both further.

Of course, the most frustrating aspect was the fact that the task in hand wasn't that difficult. Then KB made the erroneous decision to offer advice from the sidelines. This was of course met with: "I KNOW how to do it!" And then I followed it with a feeble excuse that mumbled something about it just not working.

My pleasant afternoon's gaming was over and I petulantly tossed the pad to KB, declaring that I didn't want to play any more and he could play Ninja Gaiden or whatever he wanted. I proceeded to wallow in the midst of a self-pitying sulk, the likes of which every recently defeated gamer knows well.

Needless to say, KB didn't fare much better than I did, although his fuse was longer than mine had been. I had one eye on a movie review magazine and one eye on the TV, so I could see the source of the growing tension. The cursing and muttering became louder and more frequent. Eventually, it degenerated into a stream of profanities when the boss killed him for perhaps the tenth time in 30 minutes. I left the room before the machine and TV was switched off with a dramatic flourish and much blustering.

Silence reigned over the house for the next few moments…

Happily, I can report that we soon forgot our gaming failures when we turned to two old favourites for solace – a movie and a stiff gin.

Last Sunday made me question why we do it; the strange ritual of engaging in an activity that is ultimately made to defeat and deflate in equal measure. I know it's all to do with the human capacity for challenge, but sometimes it feels like pushing a boulder up a hill. I mean gaming isn't like climbing a mountain, where at least you get a good view along the way. And if you're climbing a mountain, you don't get sent back down to the bottom again for some minor mistake. Obviously bigger ones like cutting the rope send you to the bottom quickly. But my point is, the mountain isn't out to get you and videogames really are. How else could they be so annoying!?

I'm astounded by the power of this medium, in terms of its ability to irritate. Take for example movies; they don't inspire temper tantrums in any way shape or form. At no point have I ever stormed out of a movie theater, incensed by the way the narrative took a twist halfway through. I've never wanted to kick the electrical components out of my DVD player because a movie was a little challenging. The same, however, cannot be said of my Xbox, Gamecube, Dreamcast…I won't go on.

I would also bet money that none of you have hurled a book at the wall in abject surrender because you've got stuck on a hard word. And I'll also bet you've never swapped a novel when you were halfway through, just because it was too hard or not as good as the first one.

But the real thing that gets my goat about games is that I keep coming back for more. I can't be arsed to climb a mountain, which is probably a better thing to do with my time, but I will spend hours trying my patience in front of a videogame. And when I finally triumph, the celebration is worthy of a peak bagging expedition up Mount Kilimanjaro.

Do we play games, like mountain climbers, because they're there? Or is it because we're f**ked if that f***ing, s****y piece of crap is going to beat us, not whilst we can still draw breath?