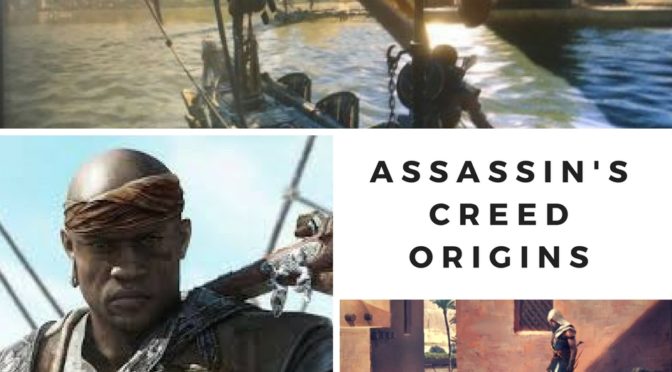 It’s been a strong rumour for a while, but now it looks almost highly likely that the next Assassin’s Creed will be set in ancient Egypt. This setting has always been bandied about, but there are now what appear to be the first images of what is apparently known as  Assassin’s Creed Origins.

This week Ubisoft confirmed a new Assassin’s Creed in its list of games for the year, including Far Cry 5. However, with no official details we need to take all this with a large pinch of salt, because the information comes from a “leak”.

The word on the street is that Assassin’s Creed Origins shares more with Black Flag than any of the other games, so we can expect lots of sailing. Apparently, one of the cities is Alexandria and we can expect improved parkour and combat. And fitting for Egypt, we could be promised a return to tombs. In addition, the early setting means the Templars may not even exist yet, so I’m guessing from the title that this is an origin story. Could be interesting.

What’s really exciting about an Assassin’s Creed in Egypt is that it offers Ubisoft an opportunity to make its protagonist African. We’ve had the two black leads, Aveline and Adéwalé, but only in DLC for Black Flag and Liberation, as well as Native American Ratonhnhaké:ton “Connor”, who were all handled with sensitivity.

Assassin’s Creed has never shied away from the multicultural aspects of history, so Assassin’s Creed Origins could take the next logical step and deliver the first black lead in a main game. However, the ‘leak’ tells us that the game is set in Roman Egypt, so Cleopatra is dead and Egypt is now a Roman province. This could give the developers an excuse to whitewash Egypt, which would be a shame.

The danger is that we get an Assassin’s Creed set in Africa, which manages to use the Roman Empire as a reason why all the main players are still mostly white or at the very most a bit tanned.

Of course, by virtue of its sheer scale the Roman Empire was very diverse. In addition, Roman society didn’t use skin colour as a means of imposing a social hierarchy. In short, we shouldn’t have to see all the dark-skinned characters as servants and slaves, which is the usual state of play for anything set in the ancient world.

When Assassin’s Creed went to America it chose an indigenous protagonist, so it seems only fair to expect the same of an Egyptian setting. The “leaked” images don’t offer any insight, but I’m worried that we’re going to get something closer to Gods of Egypt, which cast white people as Egyptian gods and brown people as the exotic backdrop.

Assassin’s Creed Origins may be an exciting reboot for the series, but it could also be a chance for Ubisoft to really set the diversity benchmark. I am really overstating the gesture though, because a black lead in a game set in Africa is actually the least they could do.

To find out more we may have to wait until Ubisoft’s E3 presentation on 12 June.