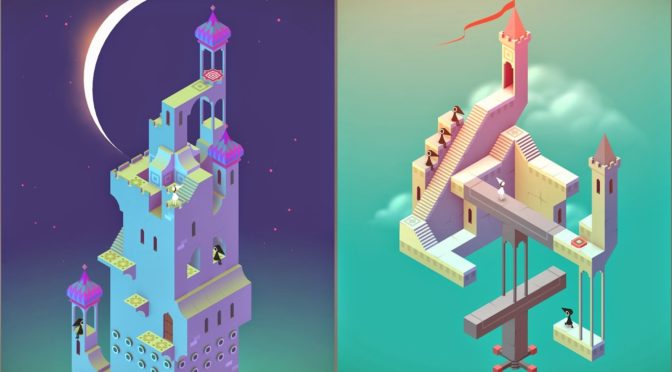 I’ve got a bit of a thing for architectural puzzle games. Think of Monument Valley or the also beautiful Pavilion, which launched last year. Both of them have a very strong sense of architecture, which informs the gameplay, even though their aesthetic is very different. The upcoming Escher-inspired game, Manifold Garden also plays with architecture, as does Gorogoa, although in a different way. But it’s only since working on a game of my own that I’ve come to appreciate how difficult it is to get architecture right.

What I love about Monument Valley, apart from the fact that it’s gorgeous, is its lack of distraction. Each level is a box that opens and unravels in a different way. There’s no sense of hurry in Monument Valley. The little figure just waits and the totem pole’s eye may rove or the crows may squawk and swing their legs, but that’s it.

I’m not very good at puzzles, so I appreciate the time and space to think. But I’m also an impatient puzzler. I get frustrated and start to doubt my ability to ever stumble upon the right answer. Monument Valley was the exception to that rule. Maybe it was because I played it on my phone, so I could snatch a moment here or there. In the DIY shop waiting for my boyfriend to find just the right screw or plank of wood, waiting for the water to boil for pasta.

Perhaps it’s the sense of detachment that comes from manipulating the world to find the answer. It’s like having a doll house. There I am, the omniscient being reaching in to help the dolls inside find their path. And if I don’t know what to do next, they have no dialogue to remind me to hurry. Instead, they just stand and wait.

Maybe Monument Valley is easy. I don’t know, but I do know that I solved it and was happy to spend a long time trying out new theories. Pavilion was harder and relied more on timing for certain puzzles, so it wasn’t quite as calm and relaxing.

Gorogoa is more of a picture book with a puzzle. From what I’ve seen, architecture features heavily, but it focuses on manipulating one picture over another to reveal new perspectives and ways through an image.  It seems to be about drawing you in, as opposed to the omniscient feeling of Monument Valley and Pavilion and I can’t wait to play it.

The game I’m making, with two other people, isn’t an architectural puzzler, but we spent a long time working out the layout for the house. It’s a short narrative-led walking sim set in a typical Victorian style flat, found anywhere in the UK.

We’d all played games like Gone Home or even Beyond: Two Souls and Life is Strange, which have a lot of walking around in houses and do those scenes very successfully. However,  as we’re a British team, we decided to set our game (working title Before I Forget) in the UK and in a period property.

The details of a home are something we all take for granted, day-to-day, but when we’re playing a game, their absence becomes glaring. Too many games place their characters in stark boxes with no character of their own and we’re trying to avoid this. How successful we’ll be depends on how long we want to spend on this side-project.

The overall architecture of the house was vital, especially as it’s a walking sim. Our first design was a linear corridor with doors on each side and a large room at the end. Not very intriguing and it also gave us little control over the player’s path, other than locking doors, because they could just walk to the end.

In addition to the actual layout, we had to consider what makes a UK home stand apart from the American ones. We started with period features, such as ceiling roses and cornicing, plus sash windows, of course. Small, cast iron fireplaces in bedrooms are another period indicator, as well as odd shaped rooms and chimney breasts.

Something as simple as styling the front door to look like a front door with a doormat, etched frosted glass panels and a letter box made such a huge difference, proving that the little things really do matter.  Similarly, radiators are more common in the UK, but we’d totally overlooked them.

Scale is easy to get wrong, whether it’s a table that’s too high, a seat that’s too deep or just a room that’s big enough to hold a Jane Austen style ball. These are all things we iron out as we go along and that make me appreciate the effort that’s gone into the games I’ve enjoyed and even the ones I’ve disliked or criticised.

Architecture is more than just level design, it elicits an emotional response. There are cultural connotations and childhood memories to be roused in the player just by the architecture of a game’s world.  Not to mention the storytelling behind the architecture and the spaces around it.

So, next time you’re playing a game, take time to notice the architecture. Even if it appears simple, someone took a lot of time agonising over making it something you experience without noticing it unless you need to.  That’s the secret of architecture in games.