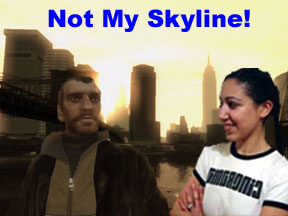 Does the world at large ever get tired of tossing court cases the way of Rockstar Games and the Grand Theft Auto series? Answers on a postcard dear play chums.

Well, okay then I'll tell you"the answer is no. The latest in the long line of litigants is bizarrely, although they've all been bizarre, the major of New York. This time an entire city is under threat from the scourge that is GTA IV. Short of trampling citizens under foot and chomping its way through the Empire State building, you could be forgiven for being unclear on how the latest GTA could harm the Big Apple.

Apparently, the politicians all got a bit hot under the collar after seeing the GTA IV trailer. We got hot under the collar too, but probably for different reasons. Mayor Michael Bloomberg was upset at the GTA locale's resemblance to NYC and to make his feelings known a spokesperson said that the Mayor didn't, "Support any videogame where you earn points for injuring or killing police officers."

Fortunately, the industry isn't asking him to condone it so that's all alright then. Oh, wait"no, apparently no it isn't. New York is now as safe as houses, so GTA is just giving the city a bad rep, according to the men in the town hall. According to the latest figures the New York murder rate is down by 23% and car theft has halved since Mayor Bloomberg came into office.

These flustered politicians likened setting Grand Theft Auto in "the safest big city in America would be like setting Halo in Disneyland." Of course they seem to have neglected to cause such a fuss about the numerous dark and violent movies set in New York.

Martin Scorsese wouldn't have a career if these if these jokers had their way and of course were consistent in their argument. Gangs of New York, although bearing no resemblance to the city we know today (or the old one if you ask me), does unjustly portray New Yorkers as badly dressed brawlers who do really bad Robert De Niro impressions. And of course there's every other movie Marty's made ever.

Sam Rami should be up for depicting the New York police force as a bunch of incompetent donut eaters who just let a spider-themed vigilante swing his way through the streets causing mayhem and pandemonium.

Woody Allen – get your coat, you're in the dock for your constant poke at the mental instability of the people of New York. If it wasn't for Mayor Bloomberg, we wouldn't know that the capital's middle classes aren't all in therapy and many of them do maintain rewarding and loving relationships with people of their own age.

The next defendant is Ghost Busters – pleading not guilty to flagrant defamation of the character of New York. The movie in question frequently calls into question the city's handle on paranormal behaviour, finishing with the barbaric mutilation of "Mr Stay Puft," plainly encouraging children to potentially fatal microwave experimentation. Since the Major's term in office, all marshmallowcide is down and the safety of our children is guaranteed.

Hmm, the Mayor's office clearly has a lot of suing to get under way. But more seriously, it's a shame that the men in suits still don't understand that games are entertainment, not training grounds for armed killers. In fact, it's almost giving games too much credit to suggest that they can cause uprisings of any kind. Methinks they haven't witnessed too many gamers slumped in the old arm chair, eyes glazed, nothing moving but the barely imperceptible rise and fall of their chest and the quick flick of thumb and finger. This is not the figure of a person inspired to go forth and slay – dial for pizza perhaps, but slay?