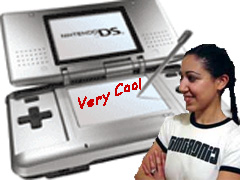 A surprising thing happened to me last night. I had an evening in with Nintendo. Now, I don't know about you, but what with Halo 2, Fable, Need for Speed, GTA and all manner of gaming goodness coming our way recently, the GameCube has been somewhat side-lined. In fact, I can't remember the last time I heard its cheerful start-up music…until last night that is.

Having finished Halo 2, I finally got my arse in gear and decided to play Pikmin 2. Aaah, what a joy. After so much flood induced carnage, it was nice to partake in some glorified gardening. I was worried that it wouldn't be as good as I'd remembered, but then the first cut-scene sucked me in. Before I knew it two hours had passed and I also managed to boil a pan of potatoes bone dry, black and smoking – oops. I was gathering pikmin before sundown and some things just can't wait.

I'm glad to report that it's as addictive and charm-laden as the first incarnation and looks even more gorgeous. It's nice to sit back and chill with a game, rather than douse myself with adrenaline fuelled frenzy. I'd forgotten what a great way Pikmin is to unwind after a hectic day. As is my duty, I thought it only right and proper to inform you of my rediscovery in case you are in need of a welcome distraction from Christmas shopping and games that swear too much.

But my dear play chums, my good fortune didn't stop there. Oh no, last night I was also given the opportunity to explore Nintendo's latest offering – the Nintendo DS.

My SP has also taken a backseat these days. Although it's small and stylish, the games just don't live up to it. There's nothing on there I want to play for any length of time or at all. So my interest in the DS has been minimal. I saw it as another pointless money leech that would be discarded on a shelf, gathering dust. I may still be right, but from last night's play my interest is piqued.

Let's face it, a console is only as good as its games and I'm sorry to say, but the GBA has been one big long catalogue of let downs as far as I'm concerned. And with a healthy amount of scepticism I picked up the DS.

First impressions are that it's pretty big and resembles one of those Texas Instruments calculators you used to have at school that came in their own hard cases. It's a bit cheap and plasticy feeling, but I can overlook style issues…sometimes.

The DS opens like a rather big, clumsy clamshell, but once inside you hit familiar territory. There are A, B, X, Y buttons on the right hand side and a D-pad on the left with a touch sensitive screen between. And above there is another screen that isn't touch sensitive. A handy stylus slips into a neat groove on the back and the familiar shoulder-buttons of the SP are present and correct.

The first game I played is practically the last game I played all evening because it is so darned fun and addictive. Feel the Magic from the Sega creators of Space Channel 5 fame – need I say more people!? I mean that just guarantees it's going to have awesome written all over it! The cool styling of the graphics is a dead give-away as you go on an adventure with an ultra-stylised silhouette boy and the girl of his affections. It all looks like a nightclub flyer for an all-nighter in Ibiza or wherever America's club bunny Mecca equivalent is.

Feel the Magic has been created to exploit the dual-screen glory and gimmickry of Nintendo's latest handheld and it does so with aplomb. The premise of the game is to win over a girl by performing great feats of daring, bravery and sometimes just plain weirdness. In other words it's a series of mini-games.

In an accident involving a bag of goldfish that get swallowed it is your job to help the poor soul regurgitate the fish. The top and bottom screen make up the figure of a man who has goldfish in his stomach. Using the stylus on the bottom screen you stroke upwards to push the fish up his gullet so he can spit them out on the top screen. It's weird but fun and more and more fish turn up, which you have to keep from slipping er…into the lower intestine. I don't know what happens when they do slip, but I'm sure it's amusing.

One of my favourites was dispensing with bulls using the stylus as they charge at the screen. The driving game was a pain in the arse, but still proved incredibly addictive. There are blowing games, where you literally blow over a sensor to extinguish candles or move sail boats. The blowing games gave me a headache and herald a wave of tabloid headlines featuring young idiots who've suffered from hyperventilation as a result of extended play.

The stylus is used in many ingenious ways, not least of which is holding hands with the girl until she blushes. Another accident means her dress gets wet and you use the stylus to undo the buttons, while sitting around the bonfire.

All in all the DS offered me an evening of innovative gameplay. The dual-screen, combined with the stylus is hopefully going to give developers something to think about. Hopefully the DS will open the floodgates to more original content and creativity. At the very least, we should be expecting Charles Cecil to give us Beneath A Steel Sky or some of the LucasArts guys to throw a few glorious point-and-click adventures our way. If there's any justice in the world Sam and Max will be gracing the dual-screen of glory soon.

But if they do – you heard it here first. Oh, and make sure the Nintendo DS is on your Christmas list to Santa.