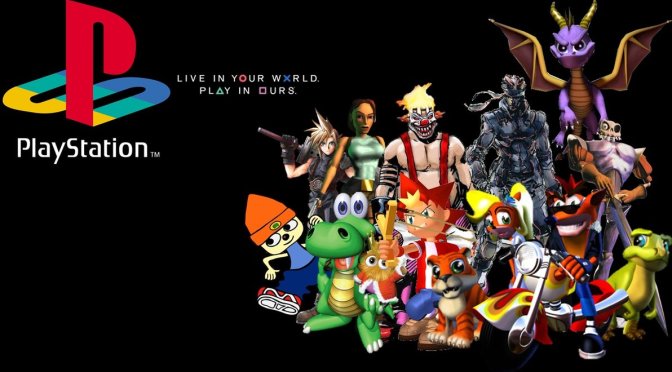 This week celebrates 20 years since the launch of PlayStation, on

December 3rd 1994. It was the console that changed everything.  Sony’s clever marketing strategy (in the UK, at least), saw its new console hit nightclubs, during the height of the dance music, recreational drugs and clubbing scene. Club goers needed something to amuse them after a night out and PlayStation became that thing.

Games like Wipeout featured throbbing dance music with fast, futuristic graphics – the perfect distraction for the twenty-something crowd. PlayStation took games out of the hands of 10 year-olds in their bedrooms and brought them into the living rooms of hip, young things. Games became cool and they were aimed at adults. The success of PlayStation saw it reign supreme for five years, bringing with it 3-D graphics and innovative games.

If your most played aren’t there, give me your list in the comments, I’d genuinely like to see them…

A racing game? I hear you cry. Not usually my genre of choice, I’ll admit. However, GT was ubiquitous, as a PlayStation owner. Everyone wanted to play it, making it the ideal post pub party game. It didn’t hurt that the graphics and driving physics were amazing, with an awesome soundtrack. Hearing Ash and The Cardigans, still takes me back to those hours and hours of track racing and tinkering in the garage.

Sorry, I know it’s a cliche, but it’s unavoidable. FFVII was a rite of passage for PSX owners. Most loved it, but some er…didn’t. It was a life eater, but back then, I had way more time on my hands, so that was okay.  FFVII was an expansive, steampunk world, way before steampunk became a buzzword for etsy sellers. Those who love it, do so because it dished up great characters with interweaving backstories, an overarching  eco-warrior plot, all topped off with deep gameplay. Oh, and it looked and sounded gorgeous. What more could you ask for?

Before the Spice Girls gave us ‘girl power’, the 90s gave us lad culture, in the UK, which saw  the launch of lads mags and the birth of the ladette – a beer-swilling, football loving, swearing, yet hot woman.

Lara Croft appealed to both the lads, who could have her splashed across the cover of their magazines, in various stages of undress, as well as the ladettes, who saw Lara as a strong, sexy woman beating the boys at their own game. This made Lara a cultural phenomenon and 20 years later, she’s still going strong, even if she is getting younger.

Lara helped take games into the mainstream, gave female gamers a decent role model and the games were really good. Tomb Raider II was the pinnacle for me. I spent many nights with friends, passing the controller around and shouting advice to try and push the right block into the right position. The Venice level remains a personal favourite, with fantastic, baroque music and beautiful level design.

I was never one for Resident Evil. It was Silent Hill all the way for me. It was foggy, creepy and didn’t feel like a straight to video film. Silent Hill didn’t look like films, it had an aesthetic all of its own and included a brilliant discordant soundtrack, which only made everything feel even worse than it looked. This was psychological gaming that meant I had to ask a friend over to help me get through the fear. The only thing scarier than Silent Hill is Silent Hill 2.

While everyone was praising Metal Gear for inventing the stealth-em up, I was sneaking over rooftops in feudal Japan, in Tenchu. You get to be a ninja, there’s cherry blossom, swords, shuriken and atmospheric music. I loved it, even if it was as hard as nails.

So, you’ve got this rabbit, made out of a single, white unbroken line, which stretches across the black screen. And the line pulses in time to the music, creating loops or jagged pits for the rabbit to jump over. The landscape changes as the music plays, in this experimental rhythm action game. The key to the game was that you could play your own CDs and Vibri, the rabbit, would have new landscapes to traverse. It’s strange and awesome and my top tip is choose something with a strong bassline. I had hours of fun with The Lost Art of Keeping a Secret by Queens of the Stone Age. It’s a crazy idea for a game, but somehow it works.

Yes, it’s another rhythm action game, but one that doesn’t get much attention. Busta Groove combines different dancing styles, in more and more outlandish dancefloor settings. During head-to-head competitions, the aim is to string together as many perfect moves, which gives you the ability to bust out a special move, which knocks the other dancer off rhythm. Special moves include perform a windmill breakdance move that creates a mini tornado, blowing the scenery away. It was crazy in a way that only Japanese games can be. They j-pop soundtrack was brilliant and the some of the songs are still worthy of a sing-a-long. Sandwiched between the eccentric PaRappa the Rappa and king of the dancefloor Dance Dance Revolution, Busta Groove didn’t get the love it deserved, but I played the hell out of it.

One day, a friend, who worked in the games industry came home with a game demo. Nothing unusual there. However, this was Tony Hawk’s Skateboarding. No other game got a look in, after that. We played that demo for months, until the game, finally, came out. Everything about it was perfect – the music, the learning curve, the level design and the gameplay.

This game hit the zeitgeist. Extreme sports were in and so was nu metal and skater punk – the perfect soundtrack. Add to that, the intuitive control system, some killer special moves and the ability to rail grind anything, in an open world skatathon and you’ve got the perfect after pub gaming experience.  I still believe I can pull off a 360 Christ Air. This game brings back very happy memories and is probably the thing I played most, every night for at least an entire summer. Thank you Neversoft.

2 thoughts on “8 PlayStation One games I played to death”