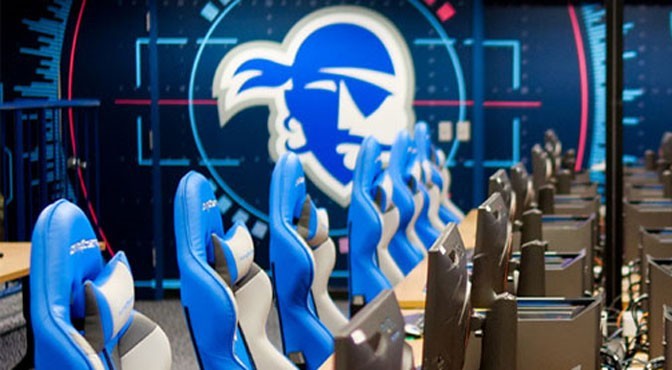 Video games have come to the Seton Hall campus — and they’re not confined to dorm rooms. In recent years, as interest in esports and video gaming has grown, so too have the resources and opportunities at Seton Hall.

Esports team members from Seton Hall now compete in the Big East Conference, which sponsors league play, tournaments and championships as it does with traditional athletics programs among its member schools. In the Big East’s inaugural season Seton Hall beat Marquette at the Big East Esports Invitational Powered by ESL and was crowned champion in Rocket League play. The Seton Hall team also placed second in League of Legends.

In November 2019, the University completed construction on a state-of-the-art computer lab and esports facility with dedicated and optimized computers for students’ recreational and competitive use.

ESL, part of the international digital entertainment group MTG, is said to be the world’s largest independent esports company.

Call it “April Madness,” if you will, as these tournaments are precursors to the 2020 EGF Conference League Season I, which kicks off on February 1, culminating in the final teams across all titles joining for the EGFC National Championship to be held in April 2020.

In November 2019, the University completed construction on a state-of-the-art computer lab and esports facility with dedicated and optimized computers for students’ recreational and competitive use. Seton Hall’s esports and gaming lounge is located in Jubilee Hall on the fifth floor. The center contains 33 desktop computers, 16 of which are game-ready and dedicated to gaming with Overwatch, Rocket League and League of Legends already installed, with gaming chairs, mice, keyboards and headsets and six monitors with the capability to project what’s displayed on any of the 16 gaming desktops throughout the room. In the esports facility, gamers also have access to consoles: Microsoft Xbox One, Sony Playstation 4 and Nintendo Switch. Although the facility will be used by Seton Hall’s gaming teams for team practice and Big East tournaments, it is open to students at times throughout the week.

“It’s about engagement and supporting our students,” said Paul Fisher, the associate chief information officer and director of the Teaching, Learning and Technology Center. “It’s a digital era and video gaming is a multi-billion-dollar industry that is expanding exponentially; employment prospects within and ancillary to the field are commensurate with any other booming industry and similar to those in traditional spectator sports. In addition to professional gaming, development and hardware engineering, the field is home to jobs in research, marketing, communication, broadcast and even event planning. Located between New York City and Philadelphia, Seton Hall students are ideally situated to take advantage of these opportunities – and we are dedicated to supporting them.”

According to Indeed.com, the share of job postings per million for Esports roles increased by 10.91% in 2019 with augmented (AR) and virtual reality (VR)-related jobs leading the way with an increase of 21.86%.

Indeed.com further notes on its website that, “There is a great deal of excitement about the explosive growth of e4sports, and it’s a prime time to look for opportunities. Four cities currently dominate the esports job market in the U.S.: Los Angeles, Houston, New York, and San Francisco. Just under half of all esports job postings nationwide are in these metro areas, with the other 50% dispersed across the country.”

It will be interesting to see if—or how—the geography of esports jobs changes over the next few years. For instance, the first dedicated Esports arena in the U.S. will open in 2021; located in Philadelphia, this $50 million facility is expected to become a destination for visiting enthusiasts.

What’s more, Esports viewership is projected to jump nearly 70% by 2023, indicating significant expansion in employment opportunities over the coming years to keep up with demand.

A leader in the field, Seton Hall has had an esports club team since 2013. Among the first University gaming organizations in the state of New Jersey to be recognized, the team has been asked by a number of gaming organizations (including Riot Games, the creator of League of Legends, which flew Seton Hall students to its headquarters in California) to provide insight into the future of collegiate gaming. The Seton Hall Esports team has, in fact, played a pivotal role in the shaping and formation of league-sanctioned collegiate play.

A co-founder of the team and current Seton Hall employee, Victor Gomez, assistant director of scheduling and operations, said, “I’m proud of all of it: of our team, our victories, the thousands of dollars we’ve raised for charity through partnering with great organizations such as Extra Life, and the doors we have opened with prize sponsors such as Microsoft and Athletics. Finally, I’m proud of my fellow co-founders, now alumni of the University who went on to work in great environments such as hospitals, American Express, Viacom and other inspiring jobs by using their experiences as players to strengthen their qualities as professionals.”

Christian Ciardiello, also a co-founder of the esports team at Seton Hall agreed, “Our team members regularly use and reference the problem solving and team building skills they’ve learned through their experiences within the program to benefit themselves in their academic and professional careers. In every sense of the way, esports mirrors the traditional collegiate athletics team model with many of the same benefits for players: leadership development, teamwork, communication and the pursuit of excellence.”

And like traditional college athletics, some students in esports turn pro, with many players earning in excess of $100,000 yearly. For Seton Hall, team alumnus Bryan D’Imperio went on to play for Will2Win Gaming and then transitioned into his role as the team’s director of social media and brand content as well as an affiliate broadcaster at Twitch.tv.

In 2014, more than 70 million viewers across the globe watched esports on the internet or television, according to Newzoo, the leading provider of market intelligence covering global games, esports and mobile markets. In November 2018, almost 100 million viewers watched the League of Legends World Championship broadcast online from South Korea—slightly more than the 98 million viewers who watched the Super Bowl three months later. Newzoo expects that esports viewership will increase to 427 million people and top $1 billion in revenue in 2019.

Derek Larson, a professor in the College of Communication and the Arts, is teaching a course in game design. “I look forward to my students creating and displaying their games in the new lab, as well as hosting a small game developers conference in the near future with studios from New Jersey and New York City,” Larson said.