Warner Bros. Interactive Entertainment and CD Projekt RED announced today that the award-winning, epic fantasy role-playing game, The Witcher 2: Assassins of Kings Enhanced Edition, is now available on consoles for the first time. The game launched in North America for the Xbox 360 video game and entertainment system from Microsoft and Windows PC with a quest handbook, a game world map and a soundtrack CD, all for $59.99. Defining new standards for realistic, non-linear game narration, The Witcher 2 delivers a mature, thought-provoking story to produce a matchless RPG experience. The deep story of Geralt of Rivia draws players … END_OF_DOCUMENT_TOKEN_TO_BE_REPLACED

In The Witcher 2: Assassins of Kings, players take on the role of Geralt, a professional monster slayer who became embroiled in the political turmoil in the Kingdom of Temeria by helping to squash the rebellion undertaken by The Order of the Flaming Rose, and who saved the King’s life by protecting him from a witcher-like assassin. A time of untold chaos has come as mighty forces clash behind-the-scenes in a struggle for power and influence. The Northern Kingdoms now mobilize and prepare for war. But armies on the march are not enough to stop a bloody conspiracy. Someone is … END_OF_DOCUMENT_TOKEN_TO_BE_REPLACED

CD Projekt RED had been working with a law firm to identify and prosecute individuals who pirated The Witcher 2. However, the gamer community was outraged at this, and pointed out that it was possible that non-pirates were being targeted. CD Projekt decided the community had a point, and stopped the suits. An open letter to the gaming community explaining their decision follows: An Open Letter to the Gaming Community from CD Projekt RED In early December, an article was published about a law firm acting on behalf of CD Projekt RED, contacting individuals who had downloaded The Witcher 2 … END_OF_DOCUMENT_TOKEN_TO_BE_REPLACED 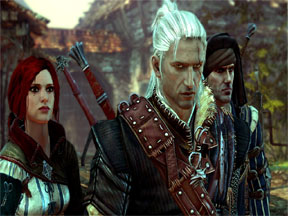 The Witcher 2: Assassins of Kings perfects what the prequel already had in spades: a hardcore, adult-themed RPG with lots of fighting, lots of thinking, plenty of role-playing and a bevy of sexy babes.

Atari, one of the world’s most recognized publishers and producers of interactive entertainment, and CD Projekt RED, a studio dedicated to creating unique non-linear RPG experiences, are pleased to announce that The Witcher 2: Assassins of Kings is being adapted for Xbox 360 video game and entertainment system from Microsoft. The planned release date slated for Q4 2011. The Xbox 360 version will be an enhanced adaptation of the PC game released to instant international acclaim in mid-May. Accordingly, it will incorporate numerous improvements and enhancements. Details will be announced over the coming months. CDProjekt RED Executive Producer John Mamais … END_OF_DOCUMENT_TOKEN_TO_BE_REPLACED 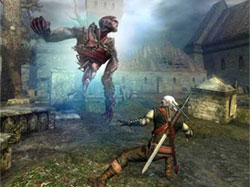 With a dark and foreboding world, plus adult situations and even sexual relations, The Witcher, offers up some great gameplay you can’t find anywhere else.