Dishonored: The Knife of Dunwall, the second add-on pack for the critically-acclaimed first-person action game developed by Arkane Studios, will be available worldwide on April 16, 2013 for Xbox 360, PS3 and PC for $9.99 (or 800 Microsoft Points). In The Knife of Dunwall you take on the role of Daud, the legendary assassin who killed the Empress, and access his weapons, gadgets, allies and supernatural abilities. After assassinating the Empress, and forever changing the fate of Dunwall, you embark on a search for redemption. The Outsider reveals the key to your atonement, but who’or what’is Delilah? Accompanied by the … END_OF_DOCUMENT_TOKEN_TO_BE_REPLACED

Dishonored’s First DLC Gets December Release Date Dishonored: Dunwall City Trials, the first add-on pack for the critically-acclaimed first-person action game developed by Arkane Studios, will be available worldwide on December 11, 2012 for Xbox 360, PS3 and PC for $4.99 (or 400 Microsoft Points). Dunwall City Trials will include 10 challenge maps that will test and track your combat, stealth and mobility skills. Creatively combine your supernatural abilities, weapons and gadgets to eliminate as many targets as possible, fight off waves of tallboys, guards, weepers and thugs, or take out targets in a non-stop run of drop assassinations. Dunwall … END_OF_DOCUMENT_TOKEN_TO_BE_REPLACED

Bethesda Softworks just released ‘Killer Moves,’ Dishonored’s compilation trailer of the best fan submitted clips showing off power combos, kill moves and stealthy action. Dishonored, the critically-acclaimed first-person action game developed by Arkane Studios, casts you as a supernatural assassin driven by revenge. Pursue your targets under the cover of darkness or ruthlessly attack them head on with weapons drawn. The outcome of each mission plays out based on the choices you make. Dishonored is available on the Xbox 360, PlayStation 3, and PC. For more information on Dishonored visit www.Dishonored.com. http://www.youtube.com/watch/?v=3Kf3oBu7MRY Publishers: Bethesda Softworks Developers: Arkane Studios Platforms: PC, … END_OF_DOCUMENT_TOKEN_TO_BE_REPLACED

Bethesda Softworks is pleased to announce three upcoming add-on packs for Dishonored, the critically-acclaimed first-person action game developed by Arkane Studios. All of the Dishonored add-on packs will be released simultaneously on Xbox 360, PS3 and PC. Dishonored: Dunwall City Trials, being released in December for $4.99 (or 400 Microsoft Points), will include 10 challenge maps that will test and track your combat, stealth and mobility skills. Ten distinct trials await challengers – including an arena battle against waves of enemy AI, a gravity-defying run of drop assassinations, and a race against the clock. Dunwall City Trials also features a … END_OF_DOCUMENT_TOKEN_TO_BE_REPLACED 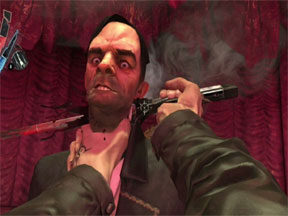 Dishonored paints a creepy, dark world and then puts players in the role of a master assassin out for revenge. Dripping in atmosphere, it’s a thinking person’s stealth adventure. 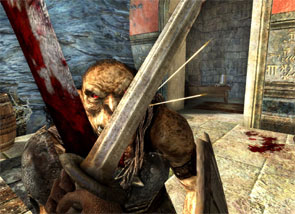 The latest game in the Might and Magic series, Dark Messiah, offers intense combat and a good story following a classic and bloody action RPG format.

When I first started playing Arx Fatalis, I was hoping for an RPG along the lines of Morrowind. I was looking for a huge non-linear campaign world that would keep me entertained for weeks at a time, maybe months. I also wanted sheer beauty, incredible sound and an engaging plot. I guess my sights were set a bit too high. Arx Fatalis is a good game, but it is very short-lived and the many flaws with both the game interface and the mission outlines were constantly competing with my ability to enjoy the game. I ended up playing the game … END_OF_DOCUMENT_TOKEN_TO_BE_REPLACED