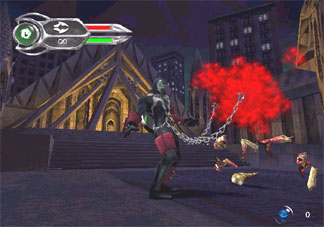 Fans of the Spawn comic book will truly love this game. Others might think it an average title, though. 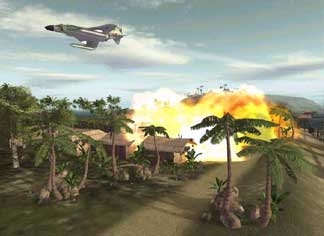 Following up on the successful online Battlefield 1942 series, we move into a new war, complete with its own 1960’s soundtrack.

When LucasArts began to diversify again by publishing a slate of non-Star Wars titles, Gladius was at the top of the lineup. No expense was spared in the creation of books and materials to let people and the press know about the game during its creation. Now that it has been released, the turn-based gladiator combat game has been winning both accolades and a huge base of players. GiN challenged Robert Blackadder of LucasArts to field questions about how Gladius came into being, and of LucasArts' new diverse portfolio. GiN: How did the idea for Gladius come about? Blackadder: I wanted to … END_OF_DOCUMENT_TOKEN_TO_BE_REPLACED

In the year 2018 a new breed of officer is needed to battle crisis on a global scale. As officer Kincaid, players will be put in charge of a team for the new SWAT Global strike Team. Starting in basic training, players will learn that this is not all fun and games and the job you are preparing for is a very serious one with deadly repercussions should you or any of your team fail. With 21 Solo Play missions and 10 Multiplay missions, the need for team cohesion is vital. SWAT has a dynamic voice system that allows players … END_OF_DOCUMENT_TOKEN_TO_BE_REPLACED

In the near future, pilots battle for control of a war-torn planet. Lethal Skies II puts players inside the cockpits of a vast array of sleek and deadly fighter planes as they battle-opposing forces for control. Players have 19 planes at their disposal and over 20 missions to plane ion both solo and linked play ability. Each craft has its own strengths and weaknesses such as speed, firepower, and agility and players will soon find themselves realizing that firepower is not always the key to success. Missions usually follow the seek and destroy variety and are varied by the settings … END_OF_DOCUMENT_TOKEN_TO_BE_REPLACED

With the pending release of Star Wars Episode III, Star Wars fans the world over have been whipped into a veritable frenzy with the promise of further adventures and merchandise based on that famous Galaxy far, far away. With great anticipation, I like many other gamers awaited the release of the new game Jedi Knight: Jedi Academy from the creative minds at Raven Software and Lucasarts. The game is a 3D shooter that is set ten years after "Return of the Jedi" when the New Republic is being menaced by the evil remnant of the Empire that seeks to reclaim … END_OF_DOCUMENT_TOKEN_TO_BE_REPLACED

In the deep recesses of space, a man has come looking for answers and seeking revenge. The man is Mace Griffin, a former member of the elite Ranger squadron has just returned from prison after being framed for the loss of his team ten years earlier. Mace takes work as a bounty hunter in an effort to gain information on who has set him up. The game unfolds in a series of missions that are punctuated by cut scenes as missions are assigned at various locations such as space stations that are teaming with activity. Innovatively blending the action of … END_OF_DOCUMENT_TOKEN_TO_BE_REPLACED

Blood Transfusion to save aging game Although some games like Grand Theft Auto: Vice City get the largest share of the game industry's revenue, there are many quality programs of note as well that don't get very much press. Then there is the Blood Transfusion project, which in all likelihood, you have never even heard about. The Blood Transfusion project is made up of a group of talented programmers who are devoted to a classic game: Blood. When Blood first came out for the PC, it was a masterpiece of visual programming. Lots of people were turned off by the … END_OF_DOCUMENT_TOKEN_TO_BE_REPLACED