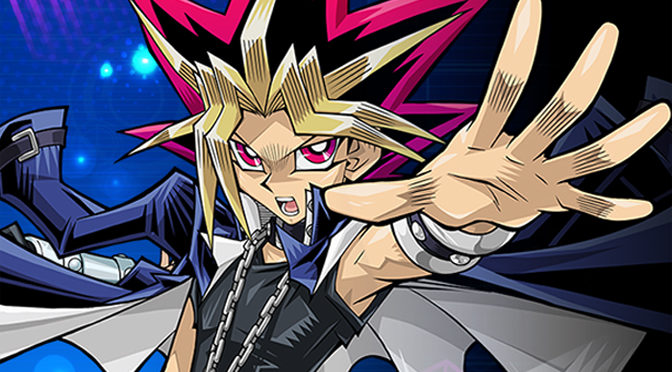 This week I spent my time playing more Stardew Valley, but I can’t really write about it for two weeks in a row. Instead, I actually had to stop myself from wasting time so that I could play a Time Waster for this week’s review. Ironic, isn’t it?

The game that was able to pull me away from my love of farm life simulators is Yu-Gi-Oh! Duel Links. It was really just a whim that had me checking this game out. I’ve enjoyed Yu-Gi-Oh games in the past and even did a review of one for GiN a few years ago, but it has been a while since I really took a look at the series. Luckily, Yu-Gi-Oh! Duel Links appears to be tailored to players like me.

Yu-Gi-Oh! Duel Links is a mobile game that has players battling with the classic set of Yu-Gi-Oh cards from when it first came to the United States. I was just a kid at the time and I absolutely loved the series and card game. This means that I easily recognized the vast majority of the cards that are in this game. This was a nice change from other recent Yu-Gi-Oh games that are released to go along with whatever version of the TV show is now running.

Battling in Yu-Gi-Oh! Duel Links is easy. Most of the controls use swipes and it’s incredibly accurate. I’ve only ever messed up a couple of times when selecting, spells, traps or monsters to play.  Being that the game only uses the older cards, it makes it a lot less complicated. There’s Normal Summoning, Special Summoning, Fusion Summoning and Ritual Summoning. This is a lot easier to keep track of and works well on a mobile device.

There are also other changes in Yu-Gi-Oh! Duel Links to make it easier to play on mobile. Some of these may not sit well with fans. The first is that decks can now only be between 20 and 30 cards in size. This is a large drop from the normal limit of 40 to 60 cards, but it does make for different strategies and faster games, which is a plus on mobile.

The final change to the rules in Yu-Gi-Oh! Duel Links is that players now only draw four cards at the start of a match. This makes sense with the reduced deck size and shrunken field. I really can’t list it as a complaint. Just consider it more of a heads-up.

Outside of these major changes, there really isn’t much difference between Yu-Gi-Oh! Duel Links and the physical version of the game. The cards are there, players buy booster packs and friendship is the main theme. It’s a Yu-Gi-Oh game through and through.

Players have the option of starting Yu-Gi-Oh! Duel Links  as either Yami Yugi or Seto Kaiba. However, this doesn’t mean that the player is stuck with that choice all game long. Rather, the player will unlock more characters as they progress in the game. This includes Joey Wheeler, Téa Gardner, Bandit Keith, Rex Raptor and others. There are 15 characters in total to unlock and they all come from the original anime series.

Each of the playable characters in Yu-Gi-Oh! Duel Links come with their own decks. The game allows the player to refine these decks with cards earned from battles and found in booster packs. They can also build completely new decks as well.

There’s also a light RPG element to the game that has the characters earning experience after battle. Leveling up unlocks rewards and new abilities for the characters. For example, Joey has an ability that gives him 1,000 extra Life Points at the start of a battle. Yami Yugi has one that lets him start battles with the Yami field card in play. Characters have multiple abilities, but only one can be used per deck. It’s another neat change this game introduces that makes deck building a little different than normal.

Yu-Gi-Oh! Duel Links doesn’t just limit players to duels against NPCs. The game also features real-time battles against other players. I’ve played a few and had no trouble connecting in just a few seconds. The battles also went by quick, but still felt satisfying. There are ranked duels, casual ones and fights against friends for players to enjoy.

Just like all other mobile games out there, Yu-Gi-Oh! Duel Links uses microtransactions. However, they are incredibly light for the type of game this is. Players can easily earn enough in-game currency to buy booster packs without having to drop real money on the game. There also aren’t any advertisements, which is a huge plus.

The art in Yu-Gi-Oh! Duel Links is great. It’s very crisp and looks good on a small screen. This is especially true for the text on cards, which was one of my chief concerns. Also, the game has a wonderfully easy to navigate user interface. It makes playing the game easy and creating decks with it is a breeze.

The audio in Yu-Gi-Oh! Duel Links is amazing. The game features the voice actors from the original anime reprising their roles. It’s great to hear them shouting out at each other during battles and declaring what they’re are about to do like they did in the anime. This addition really does a great job of making the player feel like they are watching the anime all over again. Granted, it can get old after awhile and the voices can be turned off. The music in the game is also solid, but it goes by unnoticed most of the time due to the voice work and battle sounds.

Overall, Yu-Gi-Oh! Duel Links is a great way to waste some time. It’s a solid card game on a mobile platform that also pushes all the right nostalgia buttons. It handles PvP battles like a dream and mixes up the game in small ways that make it a joy to rediscover the card game. If Yu-Gi-Oh was ever your thing as a kid, or you just want some great duels on the go, then check this game out.