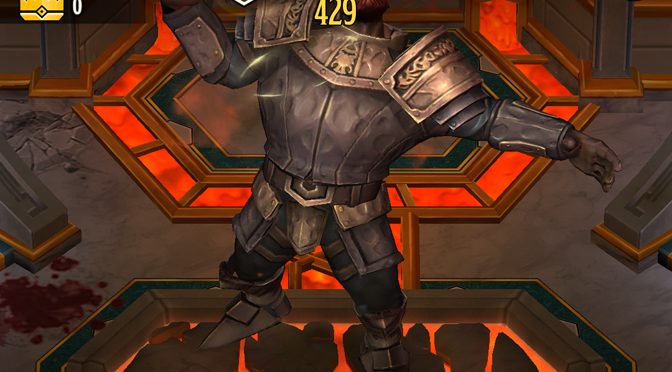 If there’s one thing I never want to do again, it’s play Warriors of Waterdeep. This is a new mobile game that claims to be “Dungeons & Dragons inspired” and has Wizards of the Coast’s official seal of approval. Excuse me while I take a moment to laugh heartily about the idea of this game being anything like D&D.

Alright. Got that out of my system.

Let’s start off with the biggest problem that Warriors of Waterdeep has. The game is pay to play. Sure, it says free with in-app purchases, but that isn’t what it means. What it is really saying is that the game is only free until about level four. At this point, the player runs into an extreme resource limitation that keeps them from moving forward with the game at all. I’m not exaggerating here, either. I’ve been putting hours into this game since having my character reach level four and I’m still stuck here.

The source of this game-breaking problem is how it hands out gold. Players only get paltry amounts of gold while playing the game.  However, they will need gold to do everything. Want to enhance your equipment? You need gold. Looking to take on some challenge dungeons? Yeah, that’s gonna cost you. How about just having the ability to level up your characters? Yet again, this is something that requires gold.

There’s just nowhere near enough gold in Warriors of Waterdeep for players to actually make any progress past level four. It also doesn’t help that the game is constantly smacking the player in the face with reminders about how they can buy more gold with gems, which is the premium currency.

Then there’s the whole VIP thing. Players can subscribe for $10 a month to get VIP status. This nets them extra VIP chests, as well as more rewards from normal chests. These VIP rewards show up without the subscription, but then the game pulls them away, making sure the player knows what they are missing out on. Here’s the thing, I’ve seen what I am missing out on, and I don’t think it’s enough to keep players steadily moving through the game. I have a strong feeling that they will still need to buy gems to get around the gold shortage.

So far I’ve just been going on about how bad the pay to play aspects of Warriors of Waterdeep are. There’s a couple of reasons for that. The first is that it really does keep players from even experiencing the game past a certain point. The second reason is that this is easily the worst experience I have ever had when it comes to a game requiring the player to spend money on it to play.

Moving on from the microtransactions of Warriors of Waterdeep, we can now talk about the rest of the game. Here’s the thing, this isn’t a D&D game. Let’s looks at a quick check list to confirm this.

It’s hard to even imagine how Warriors of Waterdeep could ever be considered a D&D game. It lacks any of the basic requirements needed to this classification and is a stain on the brand. Sure, there are other games out there that carry the D&D name and are missing a few aspects, such as BG: Dark Alliance not letting the player make their character, but they have the other basics down.

Here’s the thing about Warriors of Waterdeep. I can see that it has potential to be a good game. Maybe not a good D&D game, but a good game. The problem is just how scarce the resources are. It’s a plain cash grab from a junky mobile developer trying to trick D&D players into thinking it’s something it isn’t. Don’t let its disguise roll fool you.

Warriors of Waterdeep earns 1 GiN Gem out of 5!