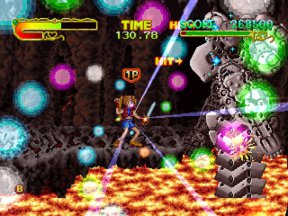 So it’s finally that time again where I tell you to go play some awesome game on the interwebs and then you ignore me and don’t do it! That’s right it’s Time Waster time! This time things are going to be a little different. I’m going to be focusing on a very specific audience today so you have my apologies if my Time Waster doesn’t tickle your fancy.

See this week I took myself a small vacation to my favorite place on Earth, Bristol, TN. Before you say anything about bad about my taste in travel let me tell you that this is the most beautiful place on Earth (I really mean that. It is absolutely gorgeous down here!). Sadly, I couldn’t stay long enough for the race but it was still an enjoyable time.

Now since I went off at last minute’s notice and I was only gone for a few days I didn’t think it would be necessary to lug around my desktop (for the record I hate using a laptop) so I decided to take my PSP along with me instead. This is the first part of me only focusing on a specific audience. The second part is that the Time Waster this week comes from the Japanese Imports section of the PSOne Classics area of games.

There is always a little bit of risk in buying an imported game but I’ve been doing it for so long now that the Japanese text doesn’t bother me. Also I feel sorry for those who missed out on Naruto Clash of Ninja 4 on the Gamecube as it is the best Naruto game to date. This is basically me telling everyone to broaden their horizons when it comes to buying imported games.

Seriously though, I should probably get around to telling you about what exactly I downloaded this week. I decided to take a risk on a random title this week named The Rapid Angel. I wasn’t disappointed.

The Rapid Angel is an old school side scrolling beat’em up type game that I would almost swear is an adaptation of an anime into game format. This is completely fine by me. First of all, I’m an anime fan and always will be. Second, it’s been too long since I actually sat down and played one of these kinds of games. The beat’em up genre kind of died for me when games fell into the third dimension. It wasn’t that I moved onto the new beat’em up titles but instead the game industry did. Much like how some people never felt comfortable with the switch from 2-D to 3-D fighters I never felt comfortable with the switch from 2-D to 3-D beat’em ups.

So Rapid Angel offers us three different characters to play as and an additional two upon beating the game. Each of the characters has their own unique set of moves which adds to the replayability of the game. While I wasn’t exactly a fan of all of the characters I can’t deny that each of them had their own advantages and disadvantages. My only problem is that the enemy bosses in the game suffer from a problem that ran rampant in this era of gaming. Start a combo after you have knocked the boss onto the ground and they will stand right up into it. This leads to infinite loops and makes the game incredibly easy, but only at the cost of making you feel cheap :).

The original release of The Rapid Angel was in the mid-90’s and as such all of the graphics look just like a 90’s anime. It’s was like getting nostalgia all while playing something new. I’m of the opinion that 90’s anime was the best in the way of graphical design. This probably has to do with the fact that I grew up in the 90’s and I might be being a little biased, but what the heck this is my column I’ll do what I want.

So besides just having those wonderful 90’s anime graphics the game also has full voice acting. Yes it is in Japanese but if you’re a fan of anime then I’m sure you’ll be able to catch a few notable phrases and words that have crossed the language gap. If not, well the scenes in game are very easy to understand and you’ll get the general mood of what is going on.

So to finish this up we have a great game anime fans that are in their 20’s and own a PS3 or PSP (I told you it was a little specific didn’t I?). Still this was a refreshing blast from the past that kept me from sleeping when I was dang tired from a fun filled day of swimming and riding Jet Skis in the lake, doing a Magic: The Gathering draft with some friends, and having a bonfire to finish it off (Yes I do realize I just made a fair amount of you envious of me). So for the small price of six dollars I can easily recommend The Rapid Angel as a great Time Waster.

The Rapid Angel has earned itself 4.5 out of 5 GiN Gems from me!