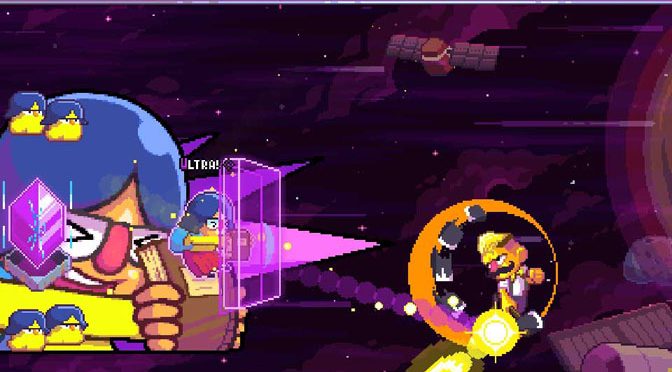 My time wasting over this last week took place on my Switch. That’s because I was sent a code for a game called Ultra Space Battle Brawl by the developers. I’d never heard of the game before, but that didn’t stop me from jumping right in.

Ultra Space Battle Brawl is a game with an incredibly interesting idea. The game is set up like a fighter, but it also has an infusion of Pong. If that sounds weird, it is, but it also works incredibly well. Probably better then you may be expecting.

Just like with any fighting game, Ultra Space Battle Brawl features a cast of colorful characters with their own interesting back stories. Each of them is taking part in a grand tournament spanning the galaxy for their own personal reasons. The winner of the tournament gets one wish. Most of the characters want to use this for their own personal gain, but many have honorable intentions as well. None of the story is really all that deep, but that fits well with the fighting game style.

The gameplay of Ultra Space Battle Brawl starts out like a game of Pong. Each player is attempting to get a ball past the other. However, that isn’t all it takes to win. See, there is a crystal on each side of the field. This crystal also has other objects protecting it. It is up to the player to destroy these objects with the ball. Once they do, they can then hit the crystal. Doing so deals damage to it and the first player to have their crystal destroyed losses the match.

There’s actually a fair bit of strategy in Ultra Space Battle Brawl. That’s because each of the different characters have their own special strength and weakness. This includes some that have more powerful swings, but can’t move quite as fast as others. They also all have their own special gauges that fill during matches. Activating these unlock special moves that can give players a real advantage over their opponents.

Another nice little feature of Ultra Space Battle Brawl is the ability to control the direction of the ball when hitting it. My only complaint here is that the game ties this aiming mechanic to the same joystick as movement. This can make it a bit difficult to aim a ball exactly where the player wants it to go. However, there’s also a dash mechanic that makes it easier to get to out of reach balls, which helps balance this out.

Players that enjoy story modes in fighting games will be happy to know that the one in Ultra Space Battle Brawl is solid. It’s the typical setup of advancing through matches with opponents, some extra minigames and one final, overpowered boss at the end. However, that final boss isn’t actually the toughest part of the story mode. There’s always a match a couple before the end that pits the player against two other characters at the same time. These two enemies are on a team, while the player is by themselves. This is easily the hardest thing in the game and honestly feels like it’s more about luck than skill.

There’s also multiplayer options available in Ultra Space Battle Brawl. The game supports up to four players for some local couch co-op action. This can let two players challenge each other directly. Players can also team up in teams of two. The action at this point starts getting a bit hectic, but it’s still a lot of fun. While it isn’t a big deal to me personally, I will note that the game doesn’t have support for online multiplayer.

The visuals in Ultra Space Battle Brawl are great. The game is clearly going for an 80s vibe with its aesthetics and it works well. This includes wonderful sprite art and great animations to go with them. There’s obviously a bit more care in this department than most other indie games, I think. The game also has its own unique style for characters by giving them all large red noses. Honestly, it didn’t appeal to me, but that’s entirely subjective.

Another positive note for Ultra Space Battle Brawl is the music. There are plenty of upbeat soundtracks that feel perfect for battle. This includes different themes for each character that helps build familiar feeling when facing off against them. One of the songs actually caught my attention hardcore. This one sounds like the opening from the old Getter Robo anime from the 70s. I’m a big fan of Getter Robo. I don’t know if this was intentional, but it did put a smile of my face.

Overall, Ultra Space Battle Brawl is a great way to waste some time. There are some elements of the game that aren’t quire perfect, but those are only minor complaints. It’s a great party game that also stands solid as a single-player experience as well. Plus, the asking price of $15 seems completely reasonable to me. Go check it out if you like fighting games or Pong.