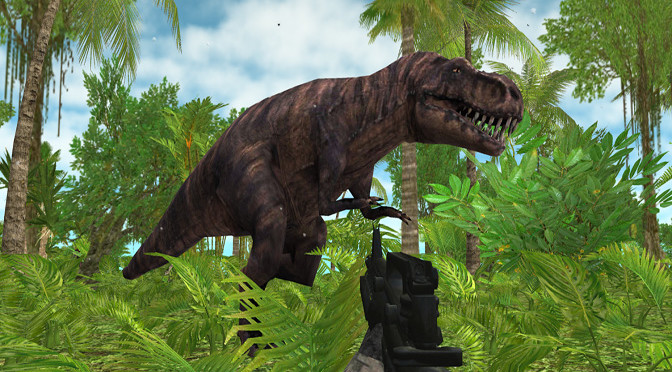 These last couple of weeks I’ve been dropping browser games on you and I figured it was time to show my smartphone a little love. Unfortunately, I decided to do so with Dinosaur Hunter: Survival Game.

Dinosaur Hunter: Survival Game is a first person shooter that places the player in the role of an unnamed soldier trying to survive in a world filled with dinosaurs. There’s really no story to the game besides this. 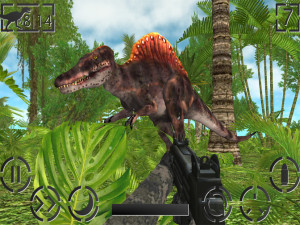 Dinosaur Hunter: Survival Game is all about fighting off waves of dinosaurs until death. The only problem is that the player is likely never going to die. Dinosaurs in this game just spawn in at random and half the time they won’t even attack the player. Even carnivores like the T-Rex are happier spinning in circles than actually trying to take the player out.

Another aspect of Dinosaur Hunter: Survival Game that makes it incredibly easy is how frequently the player gets ammo. Survival games tpycally try to limit ammo in an effort to force players into using melee weapons or making every shot count. However, this game is completely fine with just giving the player unlimited ammo for every single gun.

Speaking of guns, let’s talk about the different ones available in Dinosaur Hunter: Survival Game. Players start out with a pistol and are awarded a new gun after every couple of levels. They also have grenades (these are also unlimited) from the get go. There isn’t a lot of variety in the weapons as most of them are just machine guns. There are some sniper rifles, but their low damage and slow fire rate makes them next to useless when compared to basically every other weapon in the game.

The controls in Dinosaur Hunter: Survival Game are also a little wonky. This is of course because the game is all touch screen. There are on-screen buttons for pausing the game, changing weapons, changing from night to day and vice versa (there was no point to this that I could discover), reloading, aiming and firing. Movement is controlled on the other parts of the screen above these virtual buttons. It all makes for a very cluttered HUD that can get in the way of seeing enemies. Also, it’s really easy to press buttons on accident.

Another problem with Dinosaur Hunter: Survival Game is that the dinosaurs just aren’t threatening. They move really slow and always stop in place before doing an attack. This makes them really easy to dodge by just simply running backwards. They also have a tendency to glide across the ground without animations and disappear at random. Health also regenerates over time, making them even less of a threat. 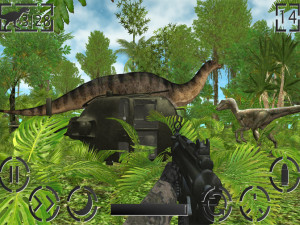 The graphics in Dinosaur Hunter: Survival Game aren’t bad. They’re solid for a smartphone game, even if they aren’t overly impressive. There’s a lot of visual glitches in the game, such as guns disappearing and other problems. I’ve also already mentioned that the screen is really cluttered.

The audio in Dinosaur Hunter: Survival Game isn’t all that good either. All the sound effects are generic and there’s one boring track that plays over and over again.

While everything I mentioned above is bad enough to not warrant even trying Dinosaur Hunter: Survival Game out, it does get worse. The most sinful part of this game are the sheer amount of ads that pop up. They appear way too frequently and are often video ads that can’t be skipped. I ended up putting my smartphone into airplane mode to avoid them just to make the game bearable enough for review.

Overall, Dinosaur Hunter: Survival Game isn’t a good game. It’s way too easy to be called a survival game and doesn’t try to challenge the player in any way. It seems a lot more likely some college student was playing around with Unity and thought “I’ll upload this on the off chance that it makes me some money,” rather than it coming from a developer with an actual goal.