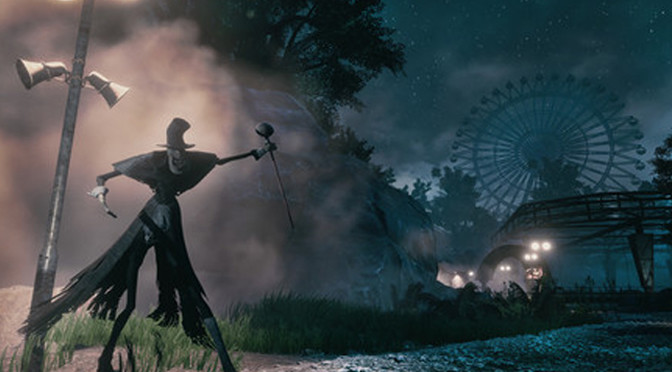 This week I decided to go with a horror game. Makes sense with it being Halloween and all, right? Actually, the thought never occurred to me until John Breeden brought it up. Horror games have never been my cup of tea, but I’m willing to give it a shot.

My pick for an appropriate horror game to play this week was The Park. This game has a little history behind it that needs to be understood. It’s based in a setting from the MMO The Secret World, which takes place in the modern world, but with the occult everywhere.

Here’s the deal; I’m not a player of The Secret World. Fortunately, The Park’s story isn’t actually connected to the MMO. It’s just a setting used in the game. This is done so that it’s easier for people to understand the game without having played the MMO.

The story of The Park has Lorraine looking for her son, Callum, after he gets lost inside an amusement park. Things quickly turn for the worse as the park looks abandoned and there are obvious supernatural events going on.

The story can actually be a bit confusing. The game’s never really clear on if events are actually happening, or if they’re the result of Lorraine’s hallucinations. It makes it hard to play detective and learn what’s really going on at the amusement park.

Lorraine is the main narrator of the game and exposition for her life and problems are handed via her internal monologue. I have no problem with this, but I felt the game didn’t utilize this in the right way. This is a horror game, and while it only got one jump scare out of me, it’s meant to be scary. Despite this, Lorraine is completely calm and collect during her internal monologues even when what are supposed to be horrifying events just occurred. This breaks the atmosphere of the game and doesn’t make it as scary as it should be. She also thinks like a professional writer, despite being a waitress at a small-town diner.

The last 15 minutes of the game are filled with creepiness and this is where that jump scare I was talking about that got me earlier came from. It was really well done with lots of detail in the environments and very low lighting with a flashlight to help out. I really wish the rest of the game would’ve been like this.

Another element of The Park that made it less scary was its gameplay. The game is upfront about the fact that it’s a narrative and won’t really challenge players at all. That’s alright, but only to a certain degree. There are several moments in the game where players are supposed to feel like they’re in danger from events happening around them. However, the game takes away the player’s ability to move, which takes away the threat. My thoughts while playing went like this: “If I can’t move, I can’t get out of the way of what’s happening, which means I must not really be in any danger.” This one thought killed the rest of the game as I never truly felt threatened, which in turn meant I was never afraid.

The graphics in The Park are nice, but they aren’t the best. Characters are a little stiff when moving and mouths sometimes just stay still despite the character talking. I will give the game credit for having a lot of detail in its environments.

The audio in the game is also well done. It’s good about placing music and sound effects at the right parts, but the other problems in the game keep them from being all that scary. The voice acting is also really solid.

I don’t usually dedicate a section of my review to price, but I feel it’s necessary this time around. The Park will set players back $13, but it only offers about 1 hour and 30 minutes of gameplay. There’s also no reason to play the game a second time, which really hurts its value. It might be worth it for players of The Secret World due to the extra items that can be unlocked in that game by purchasing this one, but those items don’t benefit the rest of the game’s players at all. I almost wonder if the price wasn’t jacked up because those items were added as a bonus in this game.

Overall, I can’t really recommend The Park. It might be worth it for The Secret World players, but it’s really not something that other players will be able to fully enjoy. It’s main problem is that it isn’t scary. This is a vital aspect of a horror game, but this one just misses that completely. It’s also way too overpriced for what it is.