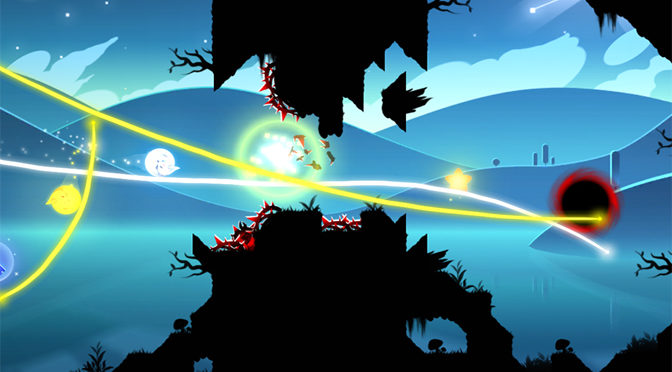 This week’s time wasting went to a mobile game called Stellar Fox. It’s a physics-based puzzle game that has players drawing lines to carry a baby fox from a starting position to a goal.

Before we get to far into the gameplay, let’s talk about the story of Stellar Fox. Honestly, I don’t often play Time Wasters that have stories, and if they do they are typically shallow. Stellar Fox falls into the latter of these categories. There are foxes that live in a constellation in the sky. The baby fox gets pulled away by an evil force and falls with other stars to a planet. It then seeks out the light in the sky that is its mother.

Getting to the mother in Stellar Fox requires the player to help the baby fox through various challenges. As I’ve already said, these have to do with drawing lines. The whole constellations, foxes and drawing lines deal definitely reminds me of Okami, but those are only passing similarities.

Stellar Fox starts players out with the very basics. They draw lines that carry the baby fox to the goal. Later levels are more interesting with additional types of lines that can be drawn, obstacles and other unique abilities.

The different ink types available in Stellar Fox keep the game interesting. There’s also some solid level design. However, the game does have one problem. It never really gets difficult. The puzzles are incredibly easy to solve, even as the game progresses. There’s a couple of tough ones thrown in there, but not many. Honestly, most of my mistakes came from not drawing the lines properly. This wasn’t really the game being difficult as much as it was me having fat fingers and a small screen.

Outside of the easy levels, there’s another problem that I have with Stellar Fox. The game is filled to the brim with ads. This includes banner ads at the bottom of the screen, video ads between levels, ads to unlock more energy, as well as the typical in-app purchases. There’s just so much extra clutter to the game that it really took me out of the experience, which is a sucky thing to feel when playing a game.

When it comes to visuals, Stellar Fox is a beautiful game. The still images that tell the story are great and the levels are also pretty to the eyes. It’s just unfortunate that there’s always so many distracting ads all over the game (I’m a little bitter about that. If you can’t tell).

The audio in Stellar Fox is also great. It has wonderfully soft music that has a whimsical feel. It fits perfectly with the game’s visuals and makes for a pleasant listening experience during play.

Overall, Stellar Fox is a game with some solid concepts, but I can’t help but think it missed out on its full potential. The gameplay ideas are neat, but never really challenging. I also have a problem with the extreme amount of ads and in-app purchase prompts that the game hits the player with. I guess at least it looks good?

3 thoughts on “Breezing Through Stellar Fox”