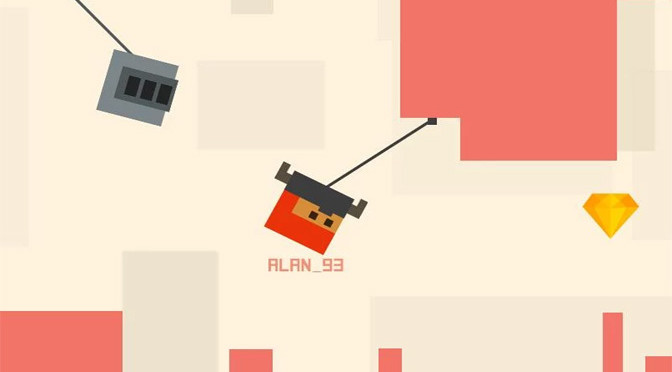 This week I had planned to return to my computer for a Time Waster, but instead I found it too hard to pull myself away from my new phone. I’m really enjoying having something like this to play on in my spare minutes and I’ve been checking out quite a few games. This week one of the games I looked at was Spider Square.

Spider Square is a simple game that has players swinging through an obstacle course as a square. I have no idea why it’s a square and why it’s swinging, but that doesn’t really matter in such a simple game.

To swing, players simply need to tap the screen and the square will launch a line above it to hold on to the ceiling with. Players have no control over where the line is thrown, which is a bit of a disappointment. It would’ve given players more control of their character to let them choose where the line was sent and I’ve played other games that do this and it works really well.

The main goal of Spider Square is to collect jewels that will allow players to unlock additional characters for use in the game. These are really just skin changes and don’t change the gameplay at all. Jewels can also be used to buy additional lives after dying. It gets more expensive to buy a life the more a player dies during a single run.

One of the best parts of Spider Square is its multiplayer. The game uses a ghost system that has players competing against each other with their recorded runs, rather than at the same time. I’ve always liked this type of multiplayer for mobile games because it leaves it up to each of the players to decide when they want to take on the challenge. It’s a lot better than trying to get two people on their smartphones to play the game at the same time.

One thing I noted when playing Spider Square is that there was a real lack of ads. The game doesn’t hit players with many, but there are optional ads that players can watch to unlock more jewels. These jewels can also be bought with real money, but that’s just not for me.

The graphics in Spider Square are really simple, but also clear. It’s easy to tell what’s dangerous and what isn’t in the game, which is vital when swinging through the air at fast speeds.

The audio in the game is a bit lackluster. The music is just there and the sound effects are alright. This is basically what I’ve come to expect from mobile games, but I’m always a little disappointed when it’s what I get. I guess it’s a good thing I keep my phone muted most of th time.

Overall, I really enjoyed my time with Spider Square. It’s not the best game out there, but it’s entertaining enough. The multiplayer is the big draw for me and it guarantees that its an app that will stay on my phone for some time to come. The graphics and audio are simple, which is about normal for these types of games.