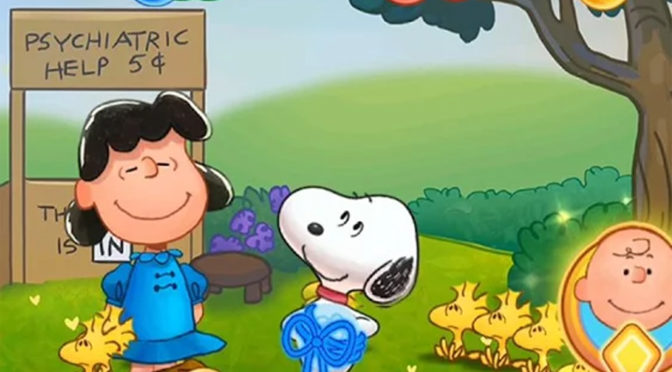 I’m just going to give a heads-up now. Expect to see a lot of mobile games over the next few weeks. I need to free up some room on my smartphone and I’ve been poking away at several games lately. This week’s game was Snoopy Pop.

Snoopy Pop is a match-three game that puts players in the role of Charlie Brown’s dog, Snoopy. Snoopy has to save Woodstock’s relatives, who have been captured in bubbles and spread across the town. He does this by clearing out large collections of bubbles with his own limited arsenal of the soapy spheres.

The easiest way I can think of to describe the gameplay of Snoopy Pop is to say that it is a Puzzle Bobble (a.k.a Bust-a-Move) clone. This means that players will have to launch bubbles from the ground to match them with those hanging above them. It’s a familiar concept that easily entertains, but the game does like to mix it up. This includes adding levels where the bubbles are held together with rope. Breaking certain bubbles change how the rope reacts and adds a bit in the way of physics puzzles to the experience. There are also other changes to keep the gameplay fresh, but this is the one that stuck out most to me.

See how Snoopy Pop is helping sponsor animal companions for those in need.

Snoopy Pop also features special moves that players can use to clear out bubbles faster. This includes throwing Charlie Brown’s infamous kite, Linus’ blanket, or other objects provided by Peanuts characters at the lines of bubbles. The powers are a neat addition that make for some interesting ways to clear out bubbles. New powers unlock the further in the game the player gets, which is another aspect to keep it entertaining.

Snoopy Pop also includes boss battles for players take on every 10 levels. The boss battles put the player up against Snoopy’s old nemesis, the Red Baron. These levels require the player to clear out an opening to the Baron so that they can hit him with one of Snoopy’s bubbles. This is another one of those small features that helps keep the game from getting stagnant.

I’ll be honest, I haven’t beat Snoopy Pop. The game has 140 levels and only just came out this week. I’m about a third of the way through right now and feel I have a good enough grasp of the game for a review. Honestly, I may never beat this game. I’ll likely poke away at it over time, but if the developers continue to add levels, which happens often with these types of games, then I’ll never likely reach the end.

Being a mobile game, Snoopy Pop has the typical microtransactions. This includes letting players buy extra lives, instant special powers and other boost in the game. Honestly, I really didn’t find these necessary and the game doesn’t feature ads, which is great.

The visuals in Snoopy Pop are a delight. It has a polished look and accurately brings much of the cast of Peanuts to life. This includes small details, such as the characters doing their signature dances at the end of a level.  I’m on an older device and saw little in the way of hangups in the game, which means that the majority of mobile gamers won’t have a problem playing this one.

The audio in Snoopy Pop is wonderful, but needs some adjustments. The game features classic Peanuts songs that fans of the series will easily remember. However, they are played at such a low volume compared to the sound effects that they almost go unheard. This isn’t a case of the music fading into the background, but more of it almost disappearing altogether. Players can turn the audio and sound effects on and off in the options, but can’t adjust their volume levels.

Overall, Snoopy Pop is a pleasant match-three game to spend some time on. Add in the visuals and music from Peanuts and it becomes that even more so. It also doesn’t feel the need to harass players with microtransactions or ads, and instead brings solid gameplay.

5 thoughts on “Snoopy Pop is a Pleasant Puzzle Game”