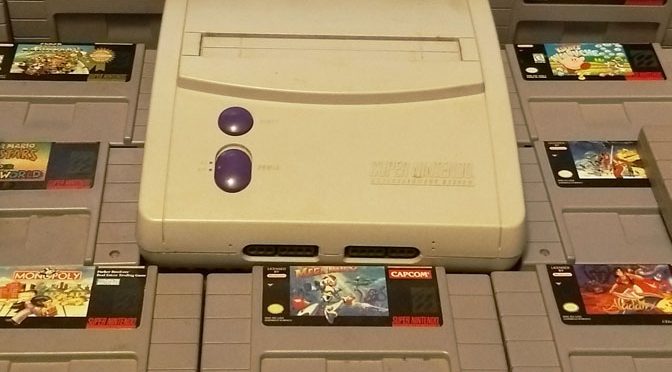 Listen, I’m going to be frank about this. This week isn’t so much of a review as it is a look back at my childhood. That may seem strange to some, but it’s been a busy week. On top of family obligations, I’ve also been spending lots of my time playing a game for a traditional review here at GiN (Yeah, it’s been awhile).

All of this left me with very little free time this week to spend on the small type of games that I typically review for the Time Waster. So Friday comes along and I’m trying to find a browser game to kill some time with. Unfortunately, each game I chose to play crashes on me before loading all the way. I don’t know if it was Chrome or the fact that they were all made in Unity. It could have been a combination of both, but it was frustrating.

With all this in mind, there was another thing this week that I did in connection to gaming. My mom let me know that she recently found the SNES in the basement. It was stored away with one of my older sister’s things from college. I’d been trying to find it for years and picked it up the next day while I was already over visiting with her.

All in all, just about everything was still with the console. The first-party SNES controller was missing, but the third-party Super Pad was still with it and works well enough. I spent the next few hours making sure it was still in working order. This also includes testing out each of the games for the system.

Here’s a quick list of the SNES games from my childhood (in no particular order).

I’ll also note that there’s a SNES cartridge for Super Mario World by itself, but I remember that being gifted to my sister by one of her friends even after we already had the All Stars + Mario World collection. Unfortunately, the one game I couldn’t find anywhere was Super Punch Out.

So with all this said, what was my experience like? Well, it was a little frustrating. While each of the games are in working order, it took more than a few tries to get some of them working. It was nostalgic the first few times, but lost a little of the magic after awhile.

The next thing worth noting was the state of the SNES controller. When I say it works well enough, what I really mean is that it worked fine if the cord was in the right position. Move it the wrong way and the whole thing ceases to function. To be fair, the cord is stiff after all these years and couldn’t move much anyways. Meaning it wasn’t much of a problem. Even then, I’m planning to buy a couple of replacements so Alia and I can play some of these older games together.

I was happy to find that some SNES games were just as good as I remember them being. That includes the likes of Mega Man X, Aladdin, the Mario games, TMNT IV and a few others. However, I can’t deny that there were some I don’t care much for as an adult. That includes Earthworm Jim, Jurassic Park and (while I don’t like to admit it because I’m a big fan of the series) Super Godzilla.

Where am I going from here? Well, my hope is to whip up a batch of Retr0Brite one of these days and give the SNES a restoration. I’ll also be going over the cartridges with some rubbing alcohol to clean up the connectors. It’ll make for a fun evening when I find the time. I’ve never been much of a handy man, but working on electronics is my cup of tea. It’s a hobby for me, just like playing video games. This little project will let me combine those hobbies together into something that I hope I will enjoy.

I’ll be back with a normal Time Waster next weekend. Until then, enjoy yourselves!