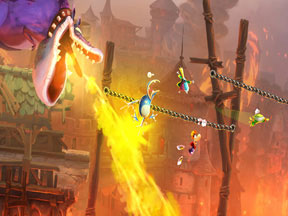 I’ve mentioned in a few of my articles that I purchased a Wii U recently. I’m glad to say that the game library on that console is filled with Time Waster candidates. This is where the Rayman Legends Challenge App comes into play.

Rayman Legends is a game from Ubisoft that was set to come out for the Wii U early this year, sadly though the game had to be delayed. Ubisoft didn’t want to completely disappoint their fans though. So they released the Rayman Legends Challenge App, which is basically three levels from Rayman Legends and the challenge mode that will be found in the game, thrown together as a freebie to all the fans who don’t want to wait.

The three levels basically act like a demo and give a good feel as to what the game will be like when it releases. One level focuses on playing the game with the touchpad. This kind of level works by having the character on screen not being controlled by the player. Instead we control Murphy as he moves parts of the level around to help the computer get through the stage.

The second level is more of your typical game. You control Rayman or one of the other characters able to be played in the game (I like using Barbara the Barbarian) to run through a beautiful 2D environment and reach the goal.

The final level is more for fun than anything. That level is a dead run through a castle that is under attack. What really sets this apart though is the fact that the level is designed so that running through it corresponds to the music that is being played, which is a Rayman version of Black Betty.

All throughout these levels are Teensies, the small lovable fellas from Rayman Origins. The Teensies are trapped in cages and must be set free. Also, you’ll run into Sprites while exploring the levels. These guys can be collected to increase your points and if collected in a certain order give more points than normal. Your score at the end of the level is all based off of how many Teensies you save as well as how many of the Sprites you collect.

The meat of this app is the challenge mode. There are both daily and weekly challenges that can be completed. These challenges range from reaching a certain distance in the quickest time, making it the furthest in a never ending level and collecting as many Sprites as possible in a certain amount of time. Since these are challenges, you won’t just be competing against yourself. Each challenge is a worldwide event and you will be stacked up against players from all over the world. I often found myself playing what should have been a two or three minute level for almost half an hour just to shave a few seconds off my time.

The art in Rayman Legends Challenge App is beautiful. The environments are hand-drawn and the characters have wonderful little quirks about them that are noticeable due to the amount of detail. Even the backgrounds are filled with a lot of detail. For example, some levels have enemies running around in the background, others have skeletons hanging from them and there are also spiders that appear in the foreground.

This app is more of an expanded demo to Rayman Legends, yet it has me coming back to play it almost daily. With its fun levels, new challenges appearing daily, and beautiful artwork, I can’t really say there are any problems with the free Rayman Legends Challenge App. It’s just too dang fun and addictive.

Rayman Legends Challenge App goes for the gold and earns 5 GiN gems out of 5!