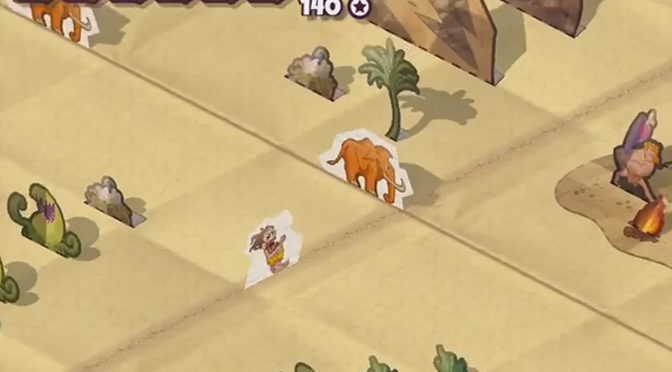 This week I’m checking out a game called Paper Run Caveman. This is a mobile game that puts players in the shoes… wait he doesn’t wear shoes. It has the player taking control of a caveman to outrun a T-Rex and avoid other dinosaurs.

Paper Run Caveman is an endless runner. It’s the most basic of the genre and only has players changing the speed at which the caveman runs. The only reason to change speed is to dodge dinosaurs that will travel in front of the player’s path. Honestly, it doesn’t really matter much. My best runs in the game have come from just setting the caveman’s run speed to max and letting him go.

Paper Run Caveman also has powerups that the player must pick up along the way. There are question marks that show up on the players path and running through them can get the player a powerup. The two powerups are Shield and Invincibility. Shield will allow the player to take a hit from a dinosaur and Invincibility does exactly what it sounds like. Coins can also be obtained from these icons.

When the player starts out in Paper Run Caveman, picking up a Shield powerup will only get them one extra hit. Invincibility will also only last for three seconds. However, players can upgrade these with coins that can be collected in-game or with a purchase using real-world money.

The cheapest upgrade to purchase in Paper Run Caveman is a boost to the Invincibility powerup. This will make it last for five seconds instead of three. *sarcastic whoo* This upgrade costs 500 coins to purchase. I played the game for one hour straight an only got my hands on 200 coins. That includes watching a video for 20 “free” coins. This game seriously expects me to spend 2 1/2 hours just to get an additional two seconds of Invincibility? Plus, that powerup is only given randomly after an icon randomly appears in my character’s path. This game can go screw itself.

That sounds bad right? Well it is, but check this out; the first Shield upgrade costs 750 coins! Sure it gives the player two extra hits instead of one, but only if they randomly get it. Plus, they won’t stack. The caveman managed to grab two Shield powerups one after each other when I let it go one time. Still, only had a single Shield. Yup, the powerups don’t stack, which is a load of crap. This means the player can have the infinitely better Shield powerup, and get it cancelled out by an Invincibility powerup that they had no choice to avoid.

You know what else sucks about Paper Run Caveman? The ads. When the player opens the game, it immediately hits them with a full-screen ad. Plus these types of ads show up in between every two to three runs. That’s way too often for how easy it is to die in this boring slog of a game. Honestly, this game is part of a larger social media network called Uplike and it just feels like something that was tacked on. Kind of like the company behind it is saying “Hey! We have cool games you can come play while sharing 200 selfies with random strangers! Isn’t that great?”

You know what is the one good thing about Paper Run Caveman? It’s visuals. Seriously, they look great. It’s got a different perspective than most endless runners that makes it seem unique. It also has a cool presentation that is like a storybook. Parts of the environment pop up as the player progress forward and the paper cutouts also work well. It’s just unfortunate that it’s part of such a bad game.

The music is alright. But it’s nothing standout. It gets boring really quick because the game isn’t able to distract the player from the one repeating track. I guess there’s really nothing wrong with the sound effects in the game, but nothing great either.

Overall, just avoid this game. It’s just so bland and boring that it isn’t even worth the time to try out. Sure, the visuals are nice, but that’s all it has going for it. Go play something fun. Steam sales have started up (my poor bank account). I’m sure you can find something cheap there that will be much better than this.