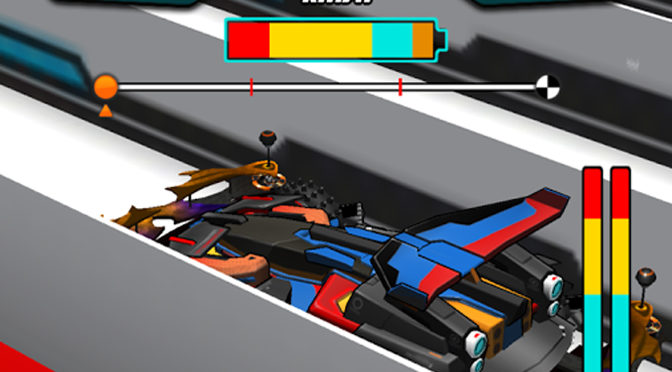 My adventures in wasting time this week led me to a mobile game called Mini Legend. This is a game all about racing Mini 4WD toy cars. Think Micro Machines, but with more kick.

Mini Legend has the player choosing their gender before setting off on their journey to master the Mini 4WD racing competition. I chose the male character for obvious reasons. The story has the player finding their father’s old Mini  4WD and getting into the sport. I really have no idea if this changes at all with the female option. It feels like a generic anime with all the tropes viewers have come to expect.

Racing in Mini Legend is incredibly simple. At the start of a race, players hold down a virtual button on their screen to charge up their Mini 4WD. Three lights around the button will turn red before a fourth light turns green. The player needs to let off of the button right as the green light comes on. Doing this will get them a perfect launch and better speeds in the race.

That’s all there is to racing in Mini Legend. It is a bit bland, but that can’t be helped due to what it is based on. There’s no controlling the toy car in a Mini 4WD race and it’s just the same in a game.

Check out this video of a Mini 4WD competition to get what I mean. I’d never heard of it before this game, but it really is a thing.

The real gameplay of Mini Legend is customizing your Mini 4WD. Players will breeze through the first few sections of the game with their father’s old one, but after a while they can make their own. Customization includes changing gears, wheels, tires, weights, the engine and more. It’s all about getting the toy car to go as fast as possible, but still having enough downward force to hold it onto the track.

There are also social aspects of the game, such as racing against other players. It’s not much different from a normal race, but players will get extra energy when they win.

Yes, it’s true. Mini Legend is one of those mobile games that forces the player to quit playing for a period due to energy restrictions. Each race takes energy and energy has to recharge over time. Players have seen this plenty of times before in mobile games and it is still annoying.

I have yet to find a mobile game so engrossing that I would spent real money on extra energy. Not even Final Fantasy Brave Exvius could achieve this feat. I’m a longtime Final Fantasy fan and lover of RPGs, but it never got a dime from me.

You know what is another good way to kill a player’s experience? Poor server connections. I had to retry connecting to Mini Legend’s servers after almost every single action I took. There were constant errors and it was very frustrating. The game only has two servers: one for Hong Kong, and another for everyone else. I’m just gonna assume the International server doesn’t get as much attention as the Hong Kong one since this game has over 1 million installs on the Google Play Store, as well as solid reviews.

Here is another disappointing part of Mini Legend. Its sense of action. After looking up real Mini 4WD races, I couldn’t help but feel like the ones in the game were incredibly slow. There was just no sense of speed to it. That video above has the cars moving so fast their hard to track, but the ones in the game feel sluggish in comparison.

The other aspects of Mini Legend’s visuals are well done. The characters all have good designs and really do feel like something that would show up on 4Kids (or whatever it’s called now) on Saturday morning. It also has a good user interface that is easy to navigate.

Audio in Mini Legend is lacking. There a single song that players during races and even it can’t give the game a better sense of speed. Outside of this, I can’t think of there being any other music in the game. There are sounds effects, but only really for charging up the Mini 4WD at the start of a race.

Overall, Mini Legend isn’t a great game, or a good game. It’s an okay game. I killed some time with it and it was free, but I think I might’ve spent more time waiting for it to connect to the server. I can’t really recommend downloading it, despite the fact that it does do some things right.

6 thoughts on “Learning Something New in Mini Legend”