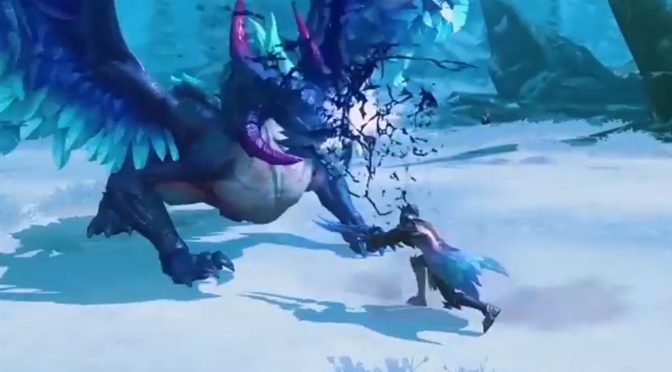 I’m actually doing it. I’m sticking to my promise from last week to check out more mobile games. Typically I tend to just stick to smaller games, but this time I’m shifting gears. This has me looking at Rangers of Oblivion, which is an MMO Action RPG.

The easiest thing to compare Rangers of Oblivion to is Monster Hunter. The game challenges players to fight and defeat monsters to obtain better parts off the creatures. The player then uses these parts to craft gear, such as weapons and armor, that they can use to hunt even tougher monsters.

Players will have a variety of different weapons to chose from in Rangers of Oblivion. This includes great swords, magic staves, gauntlets, and quite a few other options. I went with the gauntlets and the game seems to want players to more focus on a single weapon style than switching between them regularly.

With weapons and armor ready, the players are ready to really experience the combat of Rangers of Oblivion. Honestly, it’s one of the better Action RPGs on mobile.  Movement is tied to a virtual joystick and there are virtual buttons for attacks. I’ll never like this more than a controller, but the layout of the UI and responsiveness of taps make it work well enough in this game.

It’s also worth mentioning that Rangers of Oblivion has controller support. I broke out me SN30 Pro to give it a shot and it works great in combat. The layout is simple enough to get the hang of and it makes playing the game much easier. Unfortunately, it doesn’t quite work well for navigating menus or when talking to NPCs. That means players will still have to use touch controls at these times.

Rangers of Oblivion also features some typical MMO elements as well. This includes completing both story missions and side quests to progress in the game. Here’s where there was a bit of a hiccup in my experience. I got to a point a couple of hours into the game where I had a quest glitch. This was a main story quest at that. I’d completed my goal and had to bring some information back to a certain NPC. Expect that the NPC never had the dialogue option to continue to quest line. I spent a good deal of time double and triple checking to make sure I had everything I needed, and I did. However, this locked me out of the rest of the game and kept me from progressing further.

As I’m sure everyone can imagine, this was a bit of a killjoy for me. After doing some searching online, it looks like this is just one rare bug I happened to hit. With that in mind, this shouldn’t really derail anyone much from checking the game out for themselves. It just sucks because I was really digging the game, but I’m not willing to restart from scratch.

I also need to mention that there is a gacha system in Rangers of Oblivion. It’s for the Wild Soul part of the game, which gives players different special skills to use in battle. Due to how early I had to dip out of the game, I can’t really weigh in on this all that much. Just know that it is there.

Visually speaking, Rangers of Oblivion offers some top-level graphics for a mobile game. There’s even an HD texture pack that makes the game look even better. I didn’t go this route personally, but I still find it worth mentioning for anyone that really cares about the graphics in the games they play.

The audio in Rangers of Oblivion is also great. The game has lots of voice acting and it’s all in English. Even better is the fact that it all sounds good too. This genuinely caught me off guard in the best of ways, The rest of the audio in the game is also up to snuff.

Overall, Rangers of Oblivion is a great way to waste some time. It’s not the short and sweet style of game that I typically review, but it is still easily to play it in short spurts. Go give it a chance if a mobile Monster Hunter-style of game sounds like fun.

Rangers of Oblivion earns 4 GiN Gems out of 5!

One thought on “Killing Monsters in Rangers of Oblivion”