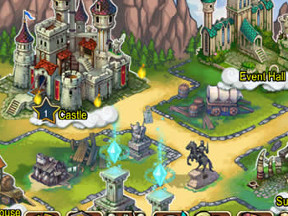 This week I went back to my phone in search of a time waster. I stumbled across a game called Pocket Knights, but unfortunately I didn’t get to spend much time with it. When I downloaded Pocket Knights, everything worked fine, but then an update came out that made the game unplayable. I don’t know if I’m the only one to suffer from this, but the game refused to update and wouldn’t let me play without the update.

Pocket Knights is an RPG that has players choosing a group of heroes and taking them through various dungeons to level up and earn loot. The game uses a similar level up system like Puzzle and Dragons and Rage of Bahamut. Heroes are leveled up by sacrificing more heroes. This level up system is all over mobile games and is starting to become a bore.
One way that Pocket Knights differentiates itself from other mobile RPGs is the inclusion of equipment. Equipment can be found in chest and will increase characters stats when equipped. Equipment can also be fortified to make it more powerful.

One part of Pocket Knights that was really disappointing is how uninvolved the combat is. When players enter a battle, their heroes will fight automatically without need of any direction. After playing games like Puzzle and Dragons, which follow the same RPG style, but give players something to do in combat, I couldn’t help but feel bored by the combat. Sure the lengthy combat scenes can be skipped, but then the game just becomes clicking through screens.

Another problem I had with Pocket Knights was how it handled level ups. Games with stamina bars normally refresh a player’s stamina upon level up, but Pocket Knights doesn’t do that. This caused me to spend a lot of diamonds (which are in-game currency bought with real money) to refresh my stamina bar. This gives anyone who uses in-game purchases a huge advantage over players that don’t.

Graphics in Pocket Knights pretty good. The heroes have unique appearances and putting them up to their next level can result in some cool looking characters. The game also has a surprisingly detailed over world for a mobile game. Animations aren’t anything amazing, but then again, they almost never are in mobile games.

The audio in Pocket Knights it probably my favorite part of the game. The opening theme to the game is a simple tune that is really beautiful. I found that this holds true for all of the music in Pocket Knights. The game also has some alright sound effects, but nothing amazing.

Overall, I feel that Pocket Knights has some interesting features, but that it needs some work. The ability to chat with everyone in the world is rare for a mobile game, but bland combat and an overused level-up system make it hard to continue playing the game. While the game has some great visuals and audio, this can’t make up for its faults.