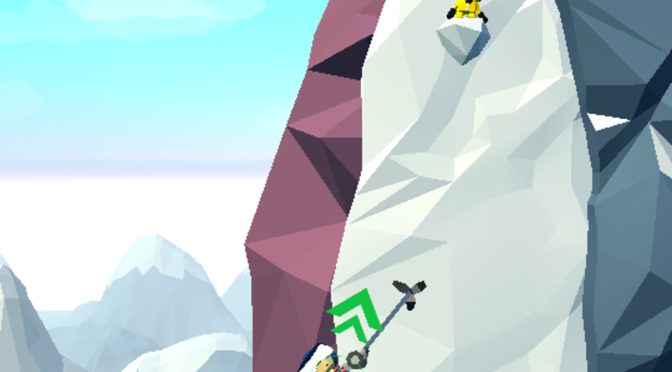 That break away from mobile games sure didn’t last long. We’re already back to checking out on-the-go gaming and this week’s target is Hang Line: Mountain Climber.

Hang Line: Mountain Climber has the player taking on the role of a mountain climber. They are out to save people that have been stranded on the mountain. They may seem like a mundane game, but this one mixes it up by adding a grappling hook.

Hang Line: Mountain Climber is a simple game to get the hand of. Players just have to tap on the screen to send out their grappling hook. So long as they hit a part of the mountain that the grapple works on, they will fly toward it. The game has the player traveling around mountains and dodging obstacles while using this grappling hook.

The thing about Hang Line: Mountain Climber is that it works, but never does much more than that. I’m not saying that the mechanics are wrong or anything. Instead, I just feel like there could be a little more to the game. Everything just feels a bit too simple and not overly engaging. This does make it an alright game to check out for some mindless fund, but even then I can’t seem to see the appeal.

I will say that Hang Line: Mountain Climber does try to mix it up by adding in extra challenges, but they are never much different than the main goal of saving stranded mountain climbers. These mostly just come down to finding other items that are lost on the mountains. It’s still just finding something that’s lost and that’s it.

The visuals in the game are okay, but never much more than that. I looks good enough on the small screen, but look at it too closely and you can notice the game starts to look a little fuzzy around the edges. It’s not a big thing, and most players probably won’t notice it, but it did stick out to me.

The audio in Hang Line: Mountain Climber is another mediocre aspect of the game. It doesn’t really pop at all. This is one of those games that works best anyway while doing something else, like watching a movie or in between rounds of another game. With that in mind, just feel free to turn off the audio and not worry about it.

Overall, Hang Line: Mountain Climber is a mediocre game. Nothing about it really stands out and I can’t help but find it boring. Like I said, the game works well, but just lacks any kind of additional features that would make it more engaging.