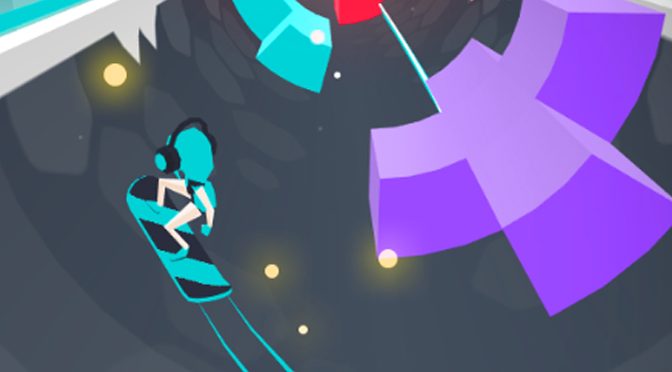 My time wasting this week was of the mobile variety. I’ve still been busy lately, and this left me with more time to spend on my smartphone, rather than my computer. In my search for ways to waste time, I found Flip: Surfing Colors.

Flip: Surfing Colors is an arcade game that has players dodging obstacles to reach the end of a course. It’s almost like an endless runner in terms of design, but there are actual ends to levels.

There are quite a few different levels that players can unlock in the game. Most of thee levels require the players to bob and weave their way to the end on their trusty snowboard. At least, I think its a snowboard. At the end of each level, the player gains another new snowboard to use. These are purely aesthetic and don’t change the gameplay at all.

What makes Flip: Surfing Colors unique are the obstacles that players can run in to. These obstacles come in a variety of different colors. Along the way, players can pick up items that will change their color. If the player touches a block that isn’t the same color as them, it will damage them for a third of their health. However, hitting an item that is the same color as the player will destroy it, as well as give them back a portion of their health. There also a super mode that lets the player crash through any obstacle.  If fills over time and is a great way to recover health.

The gameplay in Flip: Surfing Colors also changes up a bit when players jump off of certain ramps. These ramps launch the player into a mini game. This mini game requires the player to tap different colored buttons on the screen to match colors coming up down a line. It’s a little like throwing a dash of Guitar Hero into the game.

There are also special items that players can grab on every level in Flip: Surfing Colors. This includes some that only help for that level, such as rockets and hang gliders. There are also puzzles pieces that players can pick up. Each level has various puzzle pieces. Collecting all of them will complete a picture, giving the player an award.

The rewards that players can get in the game includes gems and orbs. Both are a form of in-game currency. The gems are the premium one that unlock much further levels. They can also be bought with real-world cash. The orbs are also obtained in-game, including picking them up on levels and completing missions for them. Players can use them to unlock new levels, snowboards and riders.

Now let’s talk about ads. I hate them, but I have to commend the developers of Flip: Surfing Colors for how it handles the issue. When the player dies during a course, they can watch an ad to continue from where they left off. However, the player doesn’t have to watch the ad until after their next death, or when they complete the level. This leaves the gameplay uninterrupted and is a wonderful idea. It made me much more willing to watch ads, rather than just start over. Other developers should take note.

The visuals in Flip: Surfing Colors are interesting. The game has loads of bright colors to draw the player in, but it instead uses simple flat textures. This looks perfectly fine for a mobile game. Even better, I never noticed any performance issues while playing. I’ll take that any day over better graphics.

The audio in Flip: Surfing Colors is another treat. Each of the levels in the game have visual themes connecting them to certain cities. This also extends to the music. Kyoto has Japanese music, Cairo sounds Egyptian, and so on.

Overall, Flip: Surfing Colors is a great way to waste some time. The game is simple, but enjoyable, which is really all I need from a game. To top it off, it makes a lot of smart decisions in its design and has solid visuals and music. Plus, it’s free!