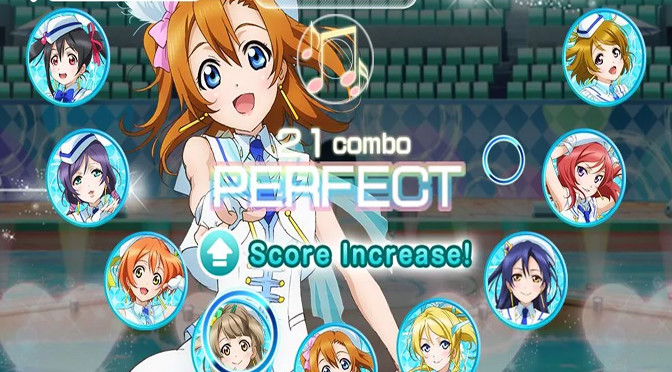 LoveLive! School Idol Festival is a smartphone rhythm game that has players managing a group of school idols that are attempting to save their school from closing down. From my understanding, this is the same story that was used in the anime, but I can’t be positive on that as I’ve never watched it.

As you might expect, all the characters in the game are kawaii schoolgirls that fit into the generic anime tropes. They all have likes and dislikes and the player can choose their favorites to make part of the idol group for live performances and practice.

Speaking of live performances, it’s the meat of LoveLive! School Idol Festival. This is where players actually get to enjoy the rhythm elements of the game. It works like most other smartphone rhythm games in that players must tap circles on the screen at the right time to earn points. There are also special circles that must be treated different in order to get points from them.

The gameplay of LoveLive! School Idol Festival is solid. I’m not a huge fan of playing games that require precision on touchscreens, but it worked out really well and there were only rare instances of feeling like I’d been cheated out of points. Also, there’s a lot of songs to choose from desu. The game has 60 tracks and each one can be played on different difficulty levels, which gives the game a lot of replay value. Players will really have to practice is they want to be the kami of this game.

LoveLive! School Idol Festival also has features that will appeal to those that like to micromanage. Players will collect different idols, learn which ones get along in practice, choose the best team for bonuses and more. It’s a lot to get into and works out well, but can mostly be avoided by those that just want to tap their way to victory in the rhythm sections of the game. Just don’t be a baka and mess it all up desu.

There is one large thing about LoveLive! School Idol Festival that bothered me. The app is only 44MB to download, which isn’t really all that bad. However, this is basically only the main interface of the game and everything else is downloaded later. I’d highly advise doing this on Wi-Fi if you don’t want your mobile data nom nom nomed through faster than you can say “Itadakimasu!” The whole game is just shy of taking up a single GB of data on my device desu.

Nani!? You say this game sounds just perfect for you? Alright, grab it then. It doesn’t cost a thing, but there are the typical in-game transactions that come with free mobile games. I’ve grown tired of having to mention this as much as I do, but I feel like readers should always have a fair warning about it.

If you’re looking for visuals that are going to blow you away in LoveLive! School Idol Festival, then you’re going to be disappointed. The whole game looks like its basically cutouts from promotional art and many of the characters just look plain generic. There also isn’t a lot of animation to be found either desu.

LoveLive! School Idol Festival is also fully voiced. This is nice and all, but it’s also part of that large amount of room it takes up that I mentioned earlier. I’m willing to bet all the voice acting is ripped right from the anime as well. The songs in the game are great and many of them are fast-paced and catchy. So that’s a plus.

Domo arigato for reading this review!

One thought on “Feeling Awkward in LoveLive! School Idol Festival”