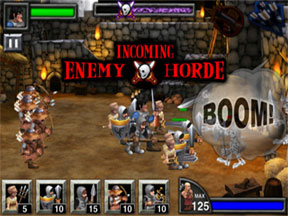 A few friends and I were sitting around talking the other day and before long the subject of Evil Dead came up. With the reboot coming out, of course we all had to put in our votes for how we felt about the new Ash. Not going to lie, I don’t know exactly how I feel about Ash being a woman in these new movies. But looking at his name, Ashley Williams, it makes me wonder if Ash was suppose to be a woman in the original film and there were just some casting issues. After a couple of minutes of talk, one of my friends looks and finds a game titled Army of Darkness Defense on his phone, and of course I can’t turn down the chance to be Ash, so I jump on it as well.

Army of Darkness Defense is a casual tower defense game with a few twists. First of all the game isn’t in the typical top down view that I’ve come to know and love in tower defense games, but instead is a 2-D side-scroller. The game also has a few RPG elements in it as well. Ash, his spells, the castle, and troops can all be upgraded to make them more efficient at defeating deadite scum.

The main character is of course Ash and he comes equipped with his trademark shotgun to fend off the deadites with. Ash will attack automatically based off of how close he is to his enemy. Long range Ash will fire his shotgun and short range he’ll hit them with his metal hand, which of course can be upgraded to the chainsaw. Ash has some special moves to bring to the table as well; he can take two extra abilities into battle with him. There are around 10 different abilities that Ash can choose from. My personal favorites are Super Boom stick, which creates a huge shotgun blast directly in front of Ash, and Magic Words, which has multiple different effects depending on what Ash mutters under his breath to try and trick the book.

Ash doesn’t have to fight all by himself though. The blacksmith is constantly pumping out iron and the more iron you have the more troops you can call into battle. These troops range from peasants to Arthur himself. Upgrading troops will increase their stats, such as damage and health. The castle can be upgraded as well. Post archers on the walls and set up catapults to help in fending off the deadites.

Army of Darkness Defense doesn’t just come with solid gameplay, it’s crammed to the brim with references that any Evil Dead lover will recognize. From Ash casting the spell ‘Clatto Verata’ and then suddenly mumbling under his breath, to famous lines such as ‘This is my Boomstick’. The game really does the movie justice.

Graphics of the game are good as well. Characters appear in the more super deformed style found in Japanese culture but minus the big eyes and big mouths. Animations are simple but effective. The lack of special effects actually helps the game since its being played on such a small screen that anything too complex would either go unnoticed or get in the way of the gameplay. The only real complaint I have is that the scenery never changes. Sure its tower defense but something as simple as switching what side of the castle is defended would help to mix up the backgrounds a bit.

Finally we have the audio. I think it’s safe to say that the audio is great, after all the vast majority of it is taken from the Army of Darkness movie itself. Sounds come through clear even on a device as small as a phone and one can never get tired of hearing quotes from Army of Darkness play though their speakers as they slay deadites.

Army of Darkness Defense blast its way to 4 GiN Gem out of 5!