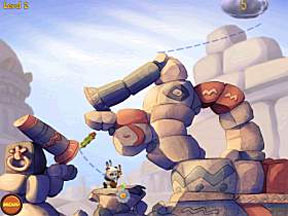 A rain making panda? Yeah, there is no way that this could be made up on the spot. Nanda’s Island is a puzzle game that the players must water plants by drawing lines to force the water where the player wants it to go. This was a very strange game but there was hope for a fun game, until it started. The game made no real sense and was not very enjoyable. There were also a few issues with the game that made this a buy if you dare game.

The principle of the game is rather simple. Nanda lives on an island that has, well, died. Nanda subsequently learned a rain dance to bring back the plant life on her home island. It can’t just rain where she wants, so the player has to direct the water to the plants by using the stylus. This becomes a tedious job for the simple fact that the water doesn’t really act like water, which we will cover later and because the plants are in horrible locations on the tops of rocks.

The game becomes even more difficult as obstacles such as evaporation spots are thrown at the players in later levels.

Now, back to those pesky rain drops that the player must direct towards their oddly placed plants. The biggest issue with the game is those darn water drops. Instead of a stream or spray of water, they are drops, literally. The rain acts more like jelly beans or really bad bouncy balls. The rain drops easily get stuck on the lines the player draws and seem to have a mind of their own. Players will find themselves screaming at their DS because your jelly beans will be going places that they weren’t meant to go.

Players must be very careful with these "rain drops" because any flat surface or crease in your lines will hold the rain drops and make the game more difficult. Don’t be scared though, the players do not need all the rain drops to advance to the next level. Therefore those misplaced drops can run off and the player can still advance.

Players will get extremely irritated with levels. Obstacles are thrown in the player’s path as the game moves along, but for the most part the levels are the exact same each time. The game really seems to drag on and becomes so mundane as the player continues to play.

The developers could have put a bit more spunk into the game to make it a bit more entertaining as the game moved along. They really should have taken a page from PvZ, and this game could have been a bit more fun.

If the player wants to have more of a challenge or maybe just play something besides story mode, then challenge mode is the next stop. Each time the player restarts, they lose a life which forces players to be more cautious and take their time planning before they play. In other words, it is pointless trial and error. This game mode becomes just as obnoxious as the story mode after a few plays.

In short, this game is not that entertaining, and can get frustrating, especially for younger players who it seems to be aimed at. The concept of the game is quite good, but once you realize that the rain acts like jellybeans instead of water, its kind of downhill from there.