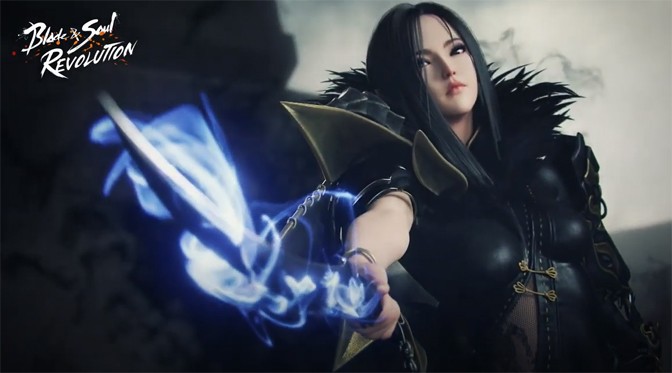 Hello, my gamer family! This is Sumroad, with another review here…on The Modern Gamer. If you’re wondering where am I this time, well. I’m at a really nice place in Bamboo Village, the hotel is rather sylvan and cozy, you’d love it in here, there’re people from all over the world here talking and crafting potions, gear, etc. some others are recovering from battles. I tell you folks, this place can be a total chaos at times but again, it is nice. Anyway, it’s time for us to get started. Sit back and relax…

Blade&Soul: Revolution (BnSR) is the mobile version of the PC game: Blade&Soul. In this game you have five classes to choose from: Blade Master, Destroyer, Kung Fu master, Force Master and Summoner. The first three are mainly melee and the other two can be roughly categorized as mage, and Summoner uses a familiar to attack from the distance. This last one could be considered the most balanced class in the game. 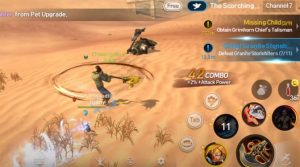 Customization of your character is rather limited but at least you got some options, like hairstyles, a few body and face shapes, and of course some colors to choose from. After you’re done with your character, it’s time to get your hands in the story. This part of the game is somehow dark and if you are a fan of storylines I believe you’d enjoy this one.

Now, leveling in this game is arguably easy, you will have fun killing mobs and getting some gear, but it can get tricky once you get around level 100. This game uses a Stamina feature, and it’s one of the most discussed in world chat. You will see a lot of people talking about it, and not exactly in a positive way. What is it with this Stamina thingie anyway? Okay… First, you have a limited amount of stamina, 120 points of it at every reset, and it grants you some buffs, additional EXP, silver and gear drop rate. It is also divided in three, 120-100, 100-70 and 70-0. Needless to say that the lower your stamina, the lower the buffs, so the best rewards comes at the higher range, then it will decrease according to the EXP gained by killing enemies, so if you go to the very first stages of the game, where the EXP gain is minimal (enough for new toons), your stamina reduction is also minimal, but when you get to higher level zones, you will notice how fast your stamina goes away. 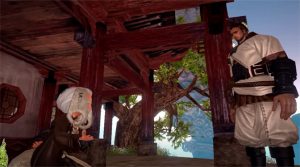 Thus, the buffs will last for a couple minutes. I think you know why some players hate it so much. To make it worse, it is virtually impossible to get any loot from monsters without using Stamina (I forgot to say you can turn it on and off). I even tried to farm in auto while sleeping and I got nothing but a few silver. Not a single drop and a very little EXP. BnSR also has this Contribution quests where you need to go through Ranks on each location and they’re basically the same: # of kills, # of rare monster kills, # of regular contribution item, # of premium contribution item and in some cases, killing the Field Boss of that particular place. Meaning, you won’t be able to complete these quests without Stamina, and as I said, it won’t last long as you level up, so you have to be extra careful on how you use it.

Moving on, BnSR has an interesting skill system, I chose a Force Master because ranged/mages classes are my thing! The skill tree is bigger than in other games, but it is widely unlocked since the very beginning, although you’ll have to level them up to unlock Variants, and this is the part where you can really get to decide how to tweak your hero. By using defensive and offensive Variants you have room to go somehow tanky or glass cannon. Then there are the Hongmoon abilities, there are unlocked after reaching level 100 and in this case they’re all locked and the only way to get through the tree is fully upgrading the previous one. So, as you can see, abilities and skills are a little wider in BnSR. 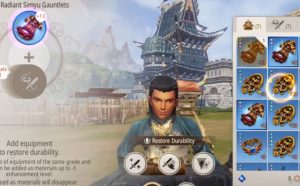 This game also features a guild system, so you can play with your buddies, team up and gain more EXP, you can also team up to run through dungeons, which is nice. Oh! BTW, dungeons are the best way to gear up in here, so if you’re a solo player, let me tell you… you’re going to need to team up to get some goodies. In this part of the game, gear is quite simple, it uses a quality system like every game in the market, you only need a weapon, two rings, a pair of earrings, a couple bracelets, and a necklace, so it’s basically accessories plus your weapon, then you have Shields. These are pieces of a pie-like picture, eight pieces to be precise. Each shield has special features, there are defensive, attack and pvp shields just like gear itself, and yes… there are different qualities here too. Ergo, this is also a way to tweak your toon, you can go full glass cannon by wearing attack-stat gear only.

But I believe you like pets, so you got pets too, they can also affect your stats in different ways, so you’ll have to choose accordingly to get the best of every situation. 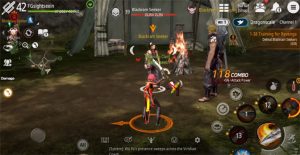 BnSR has this faction feature that I think is quite interesting. You can choose either Cerulean or Crimson, and you guessed right, they’re in war, so if you choose Cerulean, you’ll have to fight Crimson players in those maps that allows combat. For instance, there are a few locations that are dedicated to this and let me tell you, it is fun to gather up with your faction buddies and rally your enemies. Because in the end, this is a war and each Faction gain point for enemy kill, just beware, you’ll lose point every time you get killed to, so it is balanced.

Honestly, BnSR has the right amount of auto-play, so when you go to the PVP Arena, you won’t be able to go auto, and you actually need some skills to defeat your enemies so it’s not only auto like other games. Kudos. 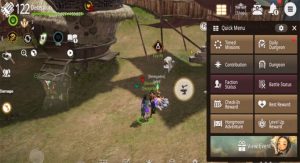 Technically the game is well done, with my main critics on the graphic side, you can literally pass through everything but scenery which feels odd and some animations looks funny and out of place. But don’t get me wrong, graphics are nice per se. Music and SFX are really nice, not invasive at all, I’d said that sound is on point, the music is soothing at times and it really adds up to the gaming experience.

Ok now, let’s wrap it up, shall we? BnSR is a good game, an appealing story, nice features and skillsets, does keep you occupied. Team work is also rewarding but not necessarily a progression wall, although I’d recommend you to team up anyway. You can get to level 130 in 3-4 days as a F2P, which, in my opinion is not bad at all. Speaking of the devil, yes, this game is P2W but I think you would enjoy it if you chose not to spend a dime. So, is BnSR worth playing? Yes, it is, it’s not a new concept but it definitely has enough elements to differentiate from the rest as well as an appealing game play. If you have the chance, go check it out and let me know your thoughts in the comments down below. This is Sumroad ready signing out, wishing you my friends and family a great gaming weekend!