Welcome my fellow gamers, Sumroad San here, welcome to my dojo… This is the Modern Gamer and today you will learn how to make a perfect LA breakfast, because I’m hungry and you know it is the most important meal of the day. No, not really, well it IS the most important meal but… yeah, don’t mind me. I’m at LAX, I’m starving (you know by now) yet I think I am going to take a cab to the beach and maybe keep on writing there. Anyway, I’ve heard karate is a thing here so I’m going to explore it a little further. Wanna join me? Let’s go! 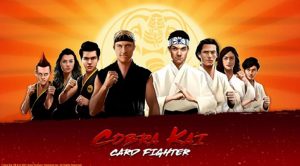 Karate, a fine ancient martial art and certainly one of the most renowned, just like Kung Fu and Taekwondo. Inspirational and life changing, Karate is one of those things that brings people together, like Johnny and his crew beating the crap out of Daniel… ok no, not in that way. Seriously, Karate is awesome, just google some and you will find amazing stuff and remember kids, violence is not the solution! Now, I think we all know Karate Kid, and how it shaped part of my life. Maybe it shaped a part of yours too. It is a pop icon and now the Cobra Kai show have sparked the thrill on a new generation, and let me tell you, I think it’s great!

If you ever played a card game, odds are you either love it or hate it. Don’t get me wrong, but I think card games are just like Mr. Miyagi said… “Either you Karate do yes, or Karate do not” and that’s why the fandom is so close, fierce and passionate. There are more than a few card games out in the market, there are actually a ton of them every one of them with their own shades. This Cobra Kai game is a card game, based on the show, which means you will find your favorite characters and a bit more.

The game starts with a tutorial, which feels mandatory in every game, right? You are in charge of the Cobra Kai dojo (you will unlock the Miyagi Do Karate dojo later) and you’re recruiting students, now it’s time to fight (right out of the gate? Yeah! what’s the problem?). In Cobra Kai, you have three basic moves, punches, kicks and holds, so from a set of five cards you will have to choose three to start the fight, limited by the amount of energy. The first player who drains the health out of its opponent, wins. You can also choose from a set of wild cards, that will increase your health, energy and modify your combat skills in different ways.

There is also a “building” view, which is the main screen. In here you will see your training rooms where you can train your students and collect some currency as well as the rest of the UI buttons and get access to the rest of the game’s features. One of them is, obviously, your roster, the student overview and the detailed view of each one of them, you can also change their outfits and you will be happy to know that there are some classic ones, like the skull outfit from the first movie. Next is the Deck Manager, where you will have control of your decks. It is a very decent manager and it’ll help you balance your abilities and wild cards. You can upgrade your skills as well so you won’t depend only on getting better cards. Good! All in all you have a practice mode and the regular fighting mode where your student will gain EXP and become stronger, Ergo, you will spend most of your time there.

On the technical side, Cobra Kai is nicely executed, the graphics felt rough at times but the music and SFX are on point. It pumps you up! Though it gets repetitive so it’d be nice to have different BGM. The UI is good too, not so many taps to get to one place and all the links and tabs are clearly visible. I like it.

It is time to wrap this up, “Cobra Kai do yes? Or Cobra Kai do not?” I would like to point out a couple things before giving you my answer. Card games don’t have to be complex to be fun and appealing, even though some complex games are just amazing! In this case, choosing three cards by side is more like a coin flip, because it is a card game but I feel like they could’ve chosen better mechanics to the fighting, giving it real strategy. Honestly, there’s no strategy in this game. Yes, that’s the sad part. The good part is the surroundings, the other pieces of the game, the students, the upgrading, the Deck Manager and the nostalgia. You will have to weigh that your yourself, but to be honest, this is a card fighting game, and strategy should play a big part and for me it’s mostly absent. That being said, there’s room for improvement, and I really hope the developers give us gamers the feeling of a card game. The basics are there. 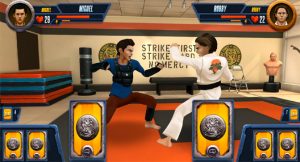 Ok folks! Time to take a cab… the All Valley Tournament is about to start and I don’t want to miss it! This is Sumroad San, wishing you an outstanding gaming weekend, and remember… “If come from inside you, always right one.” Meaning, don’t be shy and let me know your thoughts on the comment section down below. Sum vows-out!

One thought on “Everybody is Karate Card Fighting”