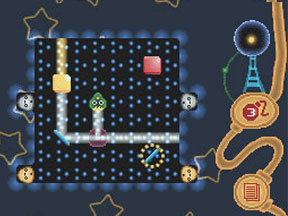 Yet another puzzle solving venture for the Nintendo DS. Is it just me or is the DS library beginning to overflow with this genre of game? Perhaps the reason for such a noticeable increase in puzzle solving games is the fact that if you actually want to find something original, innovative and intuitive — or simply just plain fun — on the system you’ll probably more frequently find it in a puzzle based game before you find it anywhere else.

That said, you can go ahead and throw another log on the fire as Eidos Interactive brings their latest DS brain teaser to the gaming table, "Prism: Light the Way."

In this simplistic, yet challenging game a race of galactic beings known as "Glowbos," whose primary source of life is light itself, are on the threat of extinction because the wicked Starbeast, "Evil Bohabail," is sucking light through a black hole and devouring it, ultimately depriving the Glowbos of their life source energy.

Fortunately for the Glowbos, another race of galactic beings from a neighboring moon known as "Bulboids," who coincidentally have the power to emit raw light, decide to come to the rescue in their darkest hour.

The task of getting light to every Glowbo in the galaxy is a little easier said than done though. Using "Gluons" or galactic matter tools which can manipulate light the Bulboids will have to color, bend, split and even reflect light to help restore the Glowbos.

That’s where you, the players, come in. There are three constants in this whole equation: 1.) Glowbos need light to survive. 2.) You can get light to the Glowbos using Bulboids who happen to emit their own light. 3.) But since, there are not enough Bulboids to match up with each individual Glowbo you will need to use Gluons a.k.a galactic matter tools to help individual Bulboids spread the light around to multiple Glowbos. Simple, right? Got it? Good. Let’s move on.

There are 4 different types of Gluons: "T-Splitters," "Mirrors," "Filter Blocks," and "Prisms." If you’re going to have any success in this game then it’s going to be important that you understand what each Gluon can do for you. The game offers a very easy and user friendly tutorial mode that will help you pick up the basics quick and in a snap, but I’ll be glad to give you the short version.

T-splitters absorb light in one end and split it out in two directions from the other ends creating a partial intersection of light. You can use Mirrors to reflect raw light in another direction at a 90 degree angle. Glowbos sometimes come in multiple colors and so it’s important that they get fed the same colored light that they actually are. That’s where Filters come in. Filters also come in multiple shades of colors and when you find the need to change raw light to a certain color you simply insert one of these into the light stream and, presto-chango, you’ve got colored light. Finally we have Prisms. Prisms are sort of an advanced style filter but they can reflect multiple colored shades of light. Shaped in the form of a square, three sides of the prism are color coded so that when raw light hits it from the one non-colored side you get three different colored lights going in three separate directions. This little tool is handy when you have a group of multiple colored Glowbos around and only one Bulboid for a light source.

So that’s the basics. Once you understand how all of the Gluons work the only other thing to do is put your knowledge into practice. The game has sort of a grid-type layout to it accented with various vibrantly colored backgrounds. Randomly placed along the edges of the grid are darkened Glowbos who are in desperate need of light. The object of the game is to manipulate the light that the Bulboids give off by using Gluons to shine light onto all the Glowbos on the grid simultaneously. When the Glowbos are all together lit, then that level is complete and you move on to the next level and a slightly more difficult challenge.

Though, this all might seem like a lot of mumbo jumbo at first, the game is actually quite simple to grasp and surprisingly a lot of fun. There are 120 levels in the game and it allows players to start off with very simple challenges at first to help them learn the ropes and then gradually becomes more challenging with each advancing level. As you get into the later levels of the game you’ll notice a lot of solid rock obstructions begin to start cluttering the grid so you’ll have to become more and more strategic about the placement of your key pieces.

Prism: Light the Way is a fun and addicting experience and will entertain the average player for quite some time before it starts to lose appeal. You can also have a blast playing the other optional modes of the game including "Time Mode," where you have a deadline to complete the board by, "Hyper Mode," a more dramatic version of the Time Mode where the Glowbos actually explode if they don’t receive light in time, and "Infinite Mode," where random puzzles are thrown at you and asking for hints reduces your score.

You can also share and solve a puzzle with the help of a friend or compete head to head against them in the "Competitve" and "Co-op" modes of the game which can prove to be an extreme amount of fun. Combining a healthy mix of fun and simplistic, yet challenging game play, Prism gets the thumbs up as it lights up the scoreboard with 4 solid GiN gems.