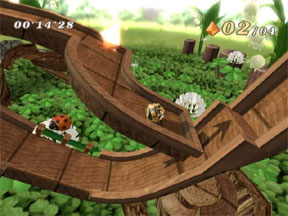 Ever wonder what it’d be like as a cat or dog or even a penguin walking through your world? It’s always been a cool idea to me; the idea of being able to hang out all day with no care in the world. Well, in Kororinpa: Marble Mania, they improve on this fascination. You don’t become an animal, but better"a marble that looks like an animal.

After playing the game, the idea of becoming one of these marbles doesn’t seem quite as thrilling. It’s a perilous life being a marble in Marble Mania. Continuously walking, or rolling rather, tight rope courses high above the ground to collect precious gems and reach your goal proves to be no easy task.

In Marble Mania, you are not really the marble per say, but control the entire board upon which the marble rolls. This is a nice change from the other marble games like Marble Madness or the Super Monkey Ball series where you are controlling the ball itself. Controlling the board can be quite tricky, with the levels getting increasingly more difficult (sometimes overwhelmingly so) and requiring total control over your wiimote.

The levels are made up of many different obstacles which require keen navigation including gaps, 90 degree rotations, and jagged terrain with pitfalls, most of the time without walls to help guide you. The 3-D environments can get confusing at points when they require you to guide your marble over certain parts of the map. Figuring out whether you are actually above the point where you need to reach can require some trial and error, throwing your marble over the edge several times before actually getting it right.

At the same time, even the small angles over which your marble rolls call for a personal relationship between you and your wiimote. The slightest movement of your hand moves the board, requiring intense concentration to make it through some of the trickier regions.

Thankfully, on the longer levels checkpoints are provided so you don’t have to start from the beginning each time your marble falls to its death. On top of all of this, not only are you attempting to reach your goal, but you have to collect a certain number of gems in each level along the way. This usually is straight forward, with little searching required to collect all the gems.

The fifty plus levels are very creative, and make working your way through them very fun, rather than frustrating. Multiple environments keep the levels from getting visually monotonous, and provide a nice atmosphere above which your marble can work its rolling magic.

As for the marble itself, Marble Mania doesn’t limit itself to your average marble. You can unlock several choices, including the previously mentioned cat, dog, and penguin which are described as "Easy, cute noises" and some increasingly harder marbles like Saturn and a gas tank which are harder to control but faster due to their weight. These marbles can add to difficulty of the game for those who wish to become masters of the Kororinpa world.

In addition to collecting your red gems for each level, a single green gem can be found in each level to unlock some extra "secret" levels. Wow! These levels, while only being a tiny portion of the overall game play, are pretty fun and add a nice bonus to the gameplay. They aren’t like the normal maze-like levels, but are random oddities, like a marble slalom or rolling around on a giant hand.

Multiplayer gaming is offered, but is simply playing one at a time or two player split screen racing.

The music of the game is a large mixture of short tracks which you unlock through the game. They range from peaceful meditations to more upbeat tracks, any of which would be a perfect ringtone.

One thing that could’ve really made this game would have been a build-your-own track option, which would have provided a good creative aspect to the game and left it really worth coming back for more rather than having to play the same levels over and over.

Overall the gameplay is very fun and the basics of the game can be picked up by all ages. The difficulty level increases quickly over the levels, giving the game a good bit of work to master. Mirror levels and secret levels make the game worth going through a second time, while replaying the original levels to beat old time records still provides motivation to keep playing. Though this is a simple game, it is fun and addictive and worth the buy for your Wii collection.

Kororinpa: Marble Mania rolls in with a 4 GiN Gems.