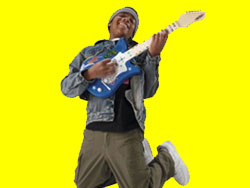 I Can Play Guitar

Growing up, a lot of you might have played with the Magical Musical Thing, which was a pretty innovative toy from Mattel which made its debut in 1978. The little toy looked a tiny bit like a guitar but played more like a piano. Kids loved it, though I suspect most parents reached a point where they regretted buying the noisy thing.

If you never experienced the joys of the Magical Musical Thing, a quick check on Google found hundreds of fan pages devoted to the funny little toy. And there are several for sale on eBay as well. Do yourself a favor and check it out.

Of course back then toys were just toys. They did not have to teach and they did not have to plug into your television for enhanced versions. But times change and Mattel is changing as well. Enter the I Can Play Guitar game system.

When the Guitar arrived at GiN world headquarters, I thought, "Ok, this is Guitar Hero for kids." And in truth, the gameplay is very similar in that you have to push buttons and strum the guitar at the correct moment when you are using it plugged into a TV and playing interactively. But this guitar is different than a Guitar Hero axe in a lot of fundamental ways.

The most important thing is that this guitar is modeled like an actual guitar. Guitar Hero looks and feels like a guitar, but a real instrument is more complicated than just the five buttons that Guitar Hero offers. Here there is a complex matrix of buttons at the top of the instrument and running down neck of the unit. And at the very bottom of the guitar is a set of real strings. This makes the experience more realistic, which we will talk about in a bit.

Secondly, I Can Play Guitar is a standalone system. You don’t need a PS2 or an Xbox 360 to play it. The only real requirement is that you have a TV built sometime after the Magical Musical Thing was introduced with VCR-jack type inputs (the red, yellow and white ones). Most modern TVs put a set of these right on the front panel for easy reach. The learning game comes loaded with a cartridge in the base, kind of like an old Atari 2600 setup. There are a bunch of other cartridges you can buy and swapping them out gives you access to new songs and even new themes, like Sponge Bob or Barbie. All the cartridges I found were reasonably priced at under $20 (most were just $15) which helps to make up for the $100+ price tag of the main unit.

Thirdly, you can use the I Can Play Guitar when not hooked to a TV. In freestanding mode you simply play the notes like a real guitar and it makes sound. On the negative side, the system does require batteries. You need to put in four C batteries to power it up. It would have been nice to have a way to plug the guitar into the wall to avoid the need to constantly get more batteries, though one set lasted us for about eight hours. There is also a huge book of stickers that comes included with the guitar, so kids can customize their axe with snakes, black cats and flames.

And finally, and I think the most important thing, is that the I Can Play Guitar rises above the level of a simple game. The emphasis here is on teaching children and young people how to play a real guitar, which might be a great step to take if your child is interested in learning to play a guitar, but you are not sure if they are really committed to it or not. Let them jam with the I Can Play Guitar a bit, and if they stick with it, you can head to the music store to pick up a real one later on.

Strictly speaking, the I Can Play Guitar game does not teach how to play a guitar, but instead shows the fundamentals of guitar play. This is a slight but important difference. Being a lifelong musician, I have seen plenty of the "learn to play guitar" systems out there. They are for the most part, pretty dull. But by skewing things towards actual gameplay, this guitar keeps things interesting. What that means is that if a child masters I Can Play Guitar he or she won’t be able to pick up a real one and start busting out tunes, but they will understand the fundamentals of how the guitar works, how to hold their hands, how to make proper cords, how to use the frets and even how to use a whammy bar. It’s not super easy learning how to play this guitar, but a lot easier than a real one, and will give you a jump start on a real one should you move in that direction.

There were six tunes in the Rock 101 cartridge of the learning model we tested. They were Smoke on the Water, Apache, All Star, La Bamba, My Girl and a really rocking version of Twinkle Twinkle Little Star. Unlike Guitar Hero, there are no lyrics here, so parents need not worry about bad language or suggestible themes unless their child is so interested by the music that they go elsewhere and look up the words.

A couple of negative points against the guitar are the feel of the strings and single note play. While I think it’s very nice that there are real strings and not some silly plastic bar at the base of the guitar, the metal strings seem too tightly strung. I could not play the guitar with the included plastic picks. You have to mash down on the strings too hard for it to register. If you played real guitar strings that hard, they would snap in a second, even the heavy duty ones. Playing with your thumb is easier, but less realistic. Secondly, you have to strum all of the strings to make notes, at least in the Rock 101 cartridge we tested. On a real guitar, you often have to pluck individual strings to make notes, a topic that either is not covered or that the guitar is incapable of actually doing. Still, these are pretty minor concerns about a game that also happens to teach. This is not a teaching tool that is also a game.

I Can Play Guitar is a lot of fun, and will set budding musicians down the right path with rhythm, timing and finger position drills. It’s a fun toy with some educational aspects that kids will love, and parents might like as well.